One of the finest examples of Romanesque architecture in northern Italy

Slightly out of the old city's hub but still easily reached by foot, San Zeno was built between the 9th and 12th centuries and dedicated to the city's patron saint.

Spend a moment outside to appreciate the fine, sober facade, highlighted by the immense 12th-century rose window, the Ruota della Fortuna (Wheel of Fortune).

This pales in importance compared to the facade below—two pillars supported by marble lions and massive doors whose 48 bronze panels were sculpted from the 9th to the 11th centuries and are believed to have been some of the first castings in bronze since Roman antiquity. They are among the city's most cherished artistic treasures and are worth the trip here even if the church is closed.

Not yet as sophisticated as those that would adorn the Baptistery doors of Florence's Duomo in the centuries to come, these are like a naive illustration from a children's book and were meant to educate the illiterate masses with scenes from the Old and New Testaments and the life of San Zeno.

They are complemented by the stone bas-reliefs found on either side of the doors, the 12C work of Niccolo, who was also responsible for the Duomo's portal.

The 14C tower on the left belonged to the former abbey, while the freestanding slender campanile on the right was begun in 1045.

The massive interior is filled with 12C to 14C frescoes and crowned by the nave's ceiling, designed as a wooden ship's keel.

But the interior's singular highlight is the famous triptych of the Madonna and Child Enthroned with Saints by Andrea Mantegna (1459), behind the main altar. Napoléon absconded with the beautiful centerpiece—a showcase for the Padua-born Mantegna's sophisticated sense of perspective and architectural detail—which was eventually returned to Verona, although two side panels stayed behind in the Louvre and in Tours.

Look in the small apse to the left of the altar for the colored marble statue of a smiling San Zeno, much loved by the local Veronesi, in an act of blessing. 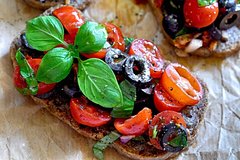 Extra Virgin Olive Oil, Bruschetta and cheese selection in Verona city centre
2h | from €40
Book it
Come and visit an exclusive secret garden included in the Cathedral Complex in the oldest part of the city on the bank of the river Adige.
You'll listen to many old tales of this ancient place and the surrounding area.
Enjoy the Italian Bruschetta and Cheeses Monte Veronese!
Take a stroll in the unique views of the river in the romantic setting of this flower garden.
Admire the ancient well which appears in Franco Zeffirelli's 1st version film Romeo and Juliet.
Taste the excellent food from Veronaesis Cuisine and experience the traditional authentic quality of Verona with a local.
This is NOT A WALKING TOUR.

Piazza, the Library and the facade of the Cathedral

Remains of the first church in Verona, lines of columns, a beautiful romanic cloister, an ancient well

The place where happened an important episode in the past

One of the most ancient library in the world..

View of the Torricelle hill from the secret garden

You'll listen to many secret tales on Verona

You'll listen to many secret tales on Verona

Get into Basilica San Zeno Maggiore for free (and skip the line at the ticket booth) with: