ReidsItaly.com Places in Italy Verona Do in Verona Performing arts in Verona

From opera at the Arena to the Shakespeare Festival

See an opera or concert in a 2,000-year-old Roman amphitheater 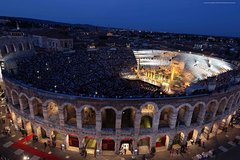 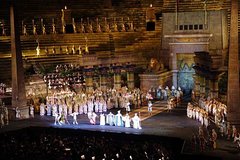 Verona opera season 2019, Roman amphitheater, Romeo and Juliet town
9–10h | from €600
Book it
In Verona, the town of Romeo and Juliet, every year they are performed operas in a stunning scenery: a Roman amphitheater that dates back to the 2nd century A.C.
The focus of this day excursion in to propose an evening to assist at one of the operas proposed.
With a comfortable minivan and a professional multilingual driver, you will have an unforgettable experience in an unique ambiance, at 1 hour and 20 minutes driving distance from Venice.

At 4:00pm, you will meet your Driver-guide at the car terminal of Venice (Piazzale Roma), or the cruise terminal, for your full day excursion. After 1 hour and 20 minutes driving distance along a highway, you will reach the town of Verona, one of the most important art cities of Italy. This tour proposal is to have an Opera experience in a Roman Amphitheater. An unforgettable opportunity performed in the town of Romeo and Juliet, not far from Venice. From June 21st to September 7th 2019, you can check your favorite day performance on the official website of "Arena Opera Festival".
Verona stands on the banks of the Adige, the second longest river of Italy, against a hilly backdrop of the Italian prealps. It is the second most important art center in the Veneto region after Venice. The city has many influences over the centuries clearly visible until the present day. From the period of the Roman Empire, the amphitheater stands out in one of the most beautiful squares in Italy, used nowadays for the opera season, concerts and important events.
In the Middle Ages Verona became one of the most important cities thanks to the Lordship of the Scaligeri. Since the beginning of the fifteenth century, remarkable is the influence of the Venetian Republic, mainly with the construction of wonderful palaces. And since the beginning of the nineteenth century, many military constructions were placed by the Austrian domination. Nowadays, one of the most visited places by tourists is Juliets house with its balcony, so famous for the Shakespearean tragedy that blends legend and reality.
In the 2019 season the following operas will be performed:
• Aida - Opera in 4 acts by Giuseppe Verdi
• Il Trovatore - Drama in 4 acts by Giuseppe Verdi
• Carmen - Opéra-comique in 4 acts by Georges Bizet
• La Traviata - Melodrama in 3 acts by Giuseppe Verdi
• Tosca - Melodrama in 3 acts by Giacomo Puccini
You will find the calendar of performances 2019  in the official website of "Arena Opera Festival". If you decide to purchase a ticket, read carefully their Spectator Regulations always reported in the website.
Before the performance, you will have time for an interesting sightseeing tour with your driver/guide who will suggest you also a restaurant for your dinner.
Depending from the opera of your interest, you will be back to Venice around 1am or 2am. 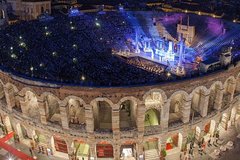 A Taste of Opera
1 hour | from €35
Book it
Enjoy the beauty of the world-renowned Operas during an informal aperitif!
Taste of Opera is an entertaining and informal gathering where you will hear interesting stories and learn more about the amazing operas to be performed this season at the Arena of Verona. Youll also have the privilege to hear some famous excerpts from the operas by a professional singer, just for you!
This experience gives you the possibility to become immersed in Italian culture. It will provide you with the historic context necessary to make the stories more meaningful.

Pre-Opera Arena food - La Botteghetta's Gourmet tour
60m | from €45
Book it
What's better than a night at the Opera? A Pre-Opera aperitif with local food and delicious wines of course!

Here's some ways to make the Opera more interesting:
Drink good wine before starting (that's a wonderful way to begin...)
Discover Verona's local food
Have fun with friends
Put all together in a wonderful tasting experience
enjoy the wine...whoops... I meant the Opera!

This special offer includes selected wines from the premium beverage list and snacks like Verona's tipical cold cuts in our wonderful locations, such as the new and the historical one.

Enjoy the premiere of the opera in a superb and exclusive location.

In this wonderful pre-Opera experience, you'll be able to to taste our genuine enogastronomic local products as cold cuts, cheeses and wines.

About the Opera:
The Festival is inaugurated by a new production of Carmen by Georges Bizet, one of the most represented in the world, to continue with great classics proposed in evocative settings, as well as the return of Nabucco by Giuseppe Verdi in the staging that inaugurated the summer season 2017.

It will be an itinerant show, from Juliets Courtyard and Juliets Balcony to some of the most beautiful places in Verona, and the final part of the drama will take place on the stage of Teatro Nuovo.
Each night a group of 100 people will be guided by the actors through the scenes of one of the most beautiful masterpieces written by William Shakespeare, a play that continues to enchant by touching everybodys heart.
Surrounded by the magical atmosphere of its medieval city centre and the charm of ancient streets and buildings, the city of Verona is the perfect theatre: it becomes the protagonist of this play as passionate as the immortal thwarted love of Romeo and Juliet.

"A good holiday is one that is spent among people whose notions of time are vaguer than yours."
— J.B. Priestley