An old-school wine bar in a 14C palazzo 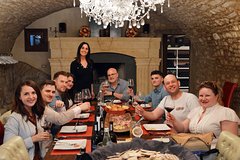 Pagus Wine Tours - Valpolicella and Amarone with lunch full day wine tour
7h | from €140
Book it
Do you want to dedicate a day to the tasting of our fabulous red wines? We will take you through the lovely Valpolicella land discovering all the secrets of our traditional wines. On the wine route, you will stop at two different wineries and you will discover the entire range of their DOC (Controlled Denomination of Origin) and DOCG (Controlled and Guaranteed Denomination of Origin), such as Valpolicella, Ripasso, Amarone and Recioto with their different styles. On the way, the great scenery of our hills and vineyards. To end the beautiful morning, we will stop to have lunch at Enoteca, or in a typical Osteria, to enjoy our traditional cuisine in a real Valpolicella atmosphere.
Join our full day wine tour (around 7 hours), compare two different Amarone styles and enjoy a great Italian lunch!

Departure at 9.00 a.m. from Via Roma, 33 Verona (in front of Castelvecchio).
We visit two Amarone producers in the Valpolicella Classica wine region, so that you can understand how the Amarone wine is made, why it is so valuable and famous, and then you can compare two different styles in wine making. We have also a complete lunch in a local osteria or enoteca with Valpolicella wines matched with traditional dishes.
Transport by air conditioned minivan (9 seats).
During the journey from Verona to the hills of Valpolicella Classica wine region, our Pagus tour leader and sommelier will be at your disposal; you'll have a visit and a wine tasting session at two Amarone wineries (at least four wines with bread, cheese and/or salami each winery), then a complete lunch in a local osteria/enoteca (wine included).
The duration is 7 h approximately.
Minimum for 2 people  max 8. 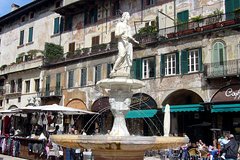 Walking Tour in Verona with Wine Tasting
2h | from €55
Book it
Feel the taste of the city with your insider. We will see and visit some of the most famous places in Verona together with places that can be discovered only with a local guide.

Enjoy, during the tour, a tasting of typical local wines. You will have unforgettable memories of this beautiful city. Starting from the 2,000 year-old Arena, the Roman Amphitheatre built some 26 years before the Colosseum of Rome to host fights between gladiators and between men and beasts, we will move along Via Mazzini, the main shopping street of Verona, where the 19th century Loggia Arvedi is to be found, and we will get to the famous Juliet's House, where the inside courtyard with the famous balcony and the statue can be seen.
Then, passing through other internal courtyards we will see the Scavi Scaligeri, excavations of the Roman and Medieval city, partially visible through the glasses, and the Porta dei Bombardieri. We will then move to the Scala family Tombs and their first house in the nearby Piazza dei Signori. There, we will notice also the 12th century City Hall, the Lamberti Tower, the 15th century Loggia di Fra'Giocondo, the 14th century Palazzo del Tribunale.
From there, we will move to Piazza Erbe, (the vegetable market), the ancient Roman Forum. There we will see the "Berlina", the place where criminals were exposed, the Fountain of Madonna Verona, (symbol of the city), the 14th century House of Merchants, the Guard Tower of the 'Gardello', the Baroque XVII century Palazzo Maffei and the frescoed Casa Mazzanti. Finally, we will reach the Well of Love with its sad story about two lovers.
The tour will end in the nearby historical Winebar (Enoteca), to taste a couple of good local wines (one red and one white) together with some light snacks.

The world is a book

"The world is a book and those who do not travel read only one page."
—St. Augustine of Hippo