Palladio's Church of the Redeemer

Antonio Palladio was perhaps the greatest architect of the High Renaissance.

One of Palladio's greatest masterpieces is Venice's Il Redentore, commissioned by the city in thanks for being delivered from the great plague of 1575–77, which claimed over a quarter of the population (some 46,000 people).

The doge established a tradition of visiting this church by crossing a long pontoon bridge made up of boats from the Dorsoduro's Zattere on the third Sunday of each July, a tradition that survived the demise of the doges and remains one of Venice's most popular festivals, complete with fireworks and a gondola regatta—and it's the only time the island of Giudecca becomes physically connected to the rest of Venice.

The artworks tend to be workshop pieces (from the studios or schools, but not the actual brushes, of Tintoretto and Veronese), but there is a fine Baptism of Christ by Veronese himself in the sacristy.

Also in the sacristy are Alvise Vivarini's good Adoration and Angels alongside works by Jacopo da Bassano and Palma il Giovane, who also did the Deposition over the right aisle's third chapel. 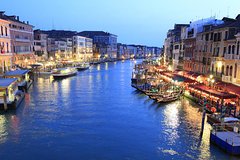 Venice Hidden Gems Guided Walking Tour Including Gondola Ride
2h | from €67
Book it
Explore romantic Venice by daytime or night, and see a selection of the city's gems! During a relaxing walking tour, pass top Venice attractions such as Rialto Bridge, alongside the lesser-known spots that influence Venetian culture. Your tour ends with a serene Venetian gondola ride (maximum six people per boat) along the canals.

Spend a leisurely 2 hours exploring the world-renowned highlights and tucked-away delights of Venice. Choose from a morning or afternoon departure to suit your schedule, and then meet your guide in central Venice near the Accademia Bridge.
Follow your expert, English-speaking guide through the quieter streets and piazzas of Venice. As you walk, your guide will captivate you with histories of CaDario, the cursed (and possibly haunted) house whose owners have continuously met untimely and often suspicious deaths. Youll learn why music schools around the world are called conservatories at Fondamenta degli Incurabili, the hospital where monks took orphans from the streets and trained them as nurses and world-famous musicians. And at Redentore Church, your guide will help you to imagine the huge festivals that once flowed from here to Piazza San Marco, gondolas filling every inch of the canals for huge firework shows.
Along with local legends, youll hear some tales of familiar characters. Youll see Harrys Bar across the canal where Ernest Hemingway once kicked back after a long day of writing. Youll see the home of Peggy Guggenheim, the heiress who lost her father to the Titanic but gained the means to build one of the worlds most interesting art collections. (Back in her day Peggy used to scandalize the locals by sunbathing naked on her roof and parading around town with a pack of tiny dogs on leashes.)
Ever heard of Othello? Youll see the house where Desdemona supposedly lived before her tale was transcribed by an Italian author and stolen by a man called William Shakespeare. For a romantic finish to your tour, climb aboard a classic Venetian gondola and enjoy a 35-minute ride through the citys famed canals. As your expert gondolier navigates the watery ways, soak up the passing sights of historic palaces and homes that line the canals, and get a glimpse into daily life in this magical city.

Get into Chiesa del Redentore for free (and skip the line at the ticket booth) with:

» more on discounts & passes
How long does Il Redentore take?

Visiting the church takes 30–45 minutes, but take the time to wander this quietest and least touristy of Venice's districts.