In Venice
In Italy

Palladio's Church of the Redeemer

An island church built by Palladio, decorated by Tintoretto and Bassano, and offering great views from the campanile

more
Church
In Venice
In Italy

The father of Neoclassicism and undisputed heavyweight champion of Renaissance architects

The Galleria dell'Accademia displays the world's most important collection of paintings by the Venetian school in its monumental galleries on the Grand Canal. Masterpieces by Titian, Tintoretto, Giovanni Bellini, Giorgione, Veronese and Tiepolo are hung on the walls of the former Scuola Grande di Santa Maria della Carita', a prestigious, fraternal lay order that is an integral part of Venice's illustrious history. A Renaissance church and a monastery built by the celebrated architect, Andrea Palladio, are also enclosed within the Galleria dell'Accademia. In the early 19th century, this complex was used to store the artistic heritage of Venice after the suppression of its monasteries, churches and guilds under Napoleonic and Austrian rule. It opened as a public museum in 1866. The museum's collection spans five centuries, and covers the Medieval, Byzantine, Renaissance and Baroque periods. Giovanni Bellini's mesmerizing Enthroned Madonna and Veronese's immense canvas of the Feast in the House of Levi are alone worth the price of admission to the Galleria dell'Accademia, a must-see on any visit to Venice. 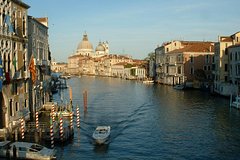 Small Group Venice Grand Canal Panoramic Tour
1 hour | from €30
Book it
Journey down the canal on this 1 hour small group tour in a motor-boat with multilingual hostess along the Grand Canal, the most beautiful street in the world. Slightly more than 3 km long and between 20 and 70 metres wide, the Grand Canal divides the city in two parts and carries the bulk of Venetian transportation, be it private boats, vaporetti (water buses), water taxis or the famous gondolas. Choose from one of 4 departure times when you book.

At your chosen time, meet your guide at the dock near the Royal Gardens Gate. The itinerary starts from St.Marks basin, from where you can admire San Giorgio Maggiore, a 16th-century Benedictine church on the island of the same name, which is one of the three Churches designed by Andrea Palladio and visible from St.Mark: the Church of the Redentore (Redeemer) and the Church of Santa Maria della Presentazione is better known as Le Zitelle.
The Grand Canal is lined on either side by palaces, churches, hotels, and other public buildings in Romanesque, Gothic, and Renaissance styles. Following the path, you can admire some properties of the important noble venetian families, for instance Palazzo Gritti and Palazzo Corner on the right side, and Palazzo Flangini on the left side. A little further on, on the opposite side, Ca Vendramin Calergi: the architecturally distinguished building was the home of many prominent people through history, and is remembered as the place where composer Richard Wagner died. Currently, it is home to the Venice Casino. Ever on the left, Ca dOro, one of the older palaces in the city, it is known as Ca' d'Oro ("golden house") due to the gilt and polychrome external decorations which once adorned its walls.
After the bow of the Canal, you will come face-to-face with one of the most famous attraction in the world: the Rialto Bridge. For centuries the Rialto has been the primary financial and commercial center of Venice. Several other palaces facing on the Grand Canal: Ca Farsetti and Palazzo Cavalli, headquartes of the Municipality of Venice, and, following the path, Ca' Foscari, the palace of the Foscari family.  Passing under the Accademia bridge, you can admire, on the left, Palazzo Cavalli Franchetti and Palazzo Barbaro, following on the right, Ca Dario well known as accursed Palace.
The tour finish where it starts: on St.Marks Basin, with a 360° wonderful view of the city, between the Santa Maria della Salute Church and Doges Palace, the most iconic building of the city.
At the end of the tour, the boat will return to the dock. 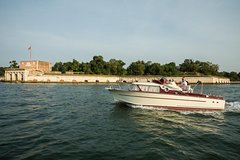 Private Cruise: Churches and Cloisters to the Islands of Venice
4h | from €600
Book it
See another side to Venice on a 4-hour private tour of the churches and cloisters around the Venetian Lagoon. Scout out places of worship on islands such as San Lazzaro degli Armeni and San Giorgio Maggiore, and hear about the nuns and monks who once lived and prayed there. Transport is by private boat, which seats up to five people.

Admire the beauties of the Lagoon of Venice, while exploring the islands of San Lazzaro degli Armeni and San Francesco del Deserto.
Start your tour with a pickup from your Venice hotel, and then head toward the island of San Giorgio Maggiore, just across the famous San Marco basin. As you travel by boat, look out for the Palladian façade of the islands church, which welcomes people to the island. A breathtaking view of Venice awaits from the top of the churchs bell tower.
Cruise toward Venice Lido to discover San Lazzaro degli Armeni, an island that was dedicated to St. Lazarus, the patron saint of lepers. Hear how a community of Armenian monks settled there at the beginning of the 18th century, and transformed the old, decayed church building into a monastery.
Pass the islands of SantAndrea and SantErasmo on your way to San Francesco del Deserto, home to an ancient friary. Learn how the friary was founded by St. Francis of Assisi in the 13th century, and how the so-called miracle of the birds took place.After four hours of cruising around the island, your tour finishes with a drop-off at the start point. 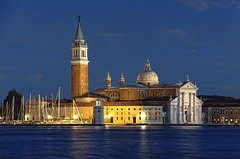 Private Cruise: Mystic Venice Cruise by Night
2h | from €400
Book it
Board the Boar boat for a special night and dinner out in the Lagoon of Venice.

Experience Venice waterfront at nightfall.
Board the Bora boat nearby St. Mark's square, leave it behind, relax and enjoy the view. See St. Marks waterfront at night with its lights and palaces reflected on the water, enjoy the silence surrounding the boat while floating and slowly approaching San Giorgio island with its Palladian white marble facade church and the Redentore church a little further on Giudecca island. Proceed to the island of San Servolo and San lazzaro degli Armeni. Cruise along Lido island to San Nicolò church, where Crusaders gathered before sailing to Istanbul. Pass silently in between the island of La Certosa and Le Vignole to get to the Arsenal on the north-east side of Venice. Admire churches and bell towers, all reflecting lights and shaped by other shadows. Venice is really a mystic place and you will never forget this experience. Share it with your friends, your family or someone special. 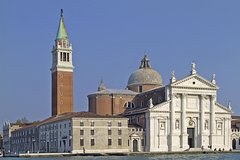 Admire two gems of the Lagoon of Venice: San Giorgio Maggiore and San Lazzaro degli Armeni islands.
Get picked up right at your Venice hotel to begin your private visit to two of the under-appreciated islands in the Venice Lagoon, San Giorgio Maggiore and San Lazzaro degli Armeni.
Looking at the lagoon, from St. Marks square, the white shape of a classical temple appears surrounded by the waters. It is San Giorgio Maggiore Church, one of the Palladian buildings in Venice, on San Giorgio island. Also known in the ancient times as the 'cypresses island,' it was first a settlement of a Benedictine community. Far from the crowded St. Marks Square, the island offers a breathtaking sight from the top of the bell tower, the façade that Venice showed to her visitors coming from the sea.
Then head for a little jewel of the lagoon, San Lazzaro degli Armeni. This island, dedicated to San Lazzaro, patron saint of the leprous, was first a leper hospital. After a few centuries of decay, at the beginning of the 18th century, a community of Armenian monks settled here. They turned the old buildings into a monastery so that the island became an incredible cultural center opened in 1789, important for its collection of books and for typography. 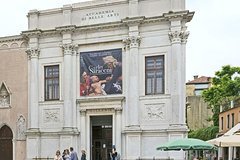 The tour will start with the Accademia Gallery, one of the most famous museums in Venice, located in the charming Dorsoduro district, next to the Accademia Bridge.
The Accademia Gallery in Venice is composed of three different buildings: The Scuola Grande of St. Mary of Charity, the Gothic church bearing the same name, and the Palladian corridor of the convent of the Lateran Canons. The guided tour allows you to get a comprehensive overview of the museum and the main art works kept inside. Each offers an interesting overview of Venetian paintings ranging from the 14th to 18th centuries: Giovanni Bellini, Vittore Carpaccio, Giorgione, Jacopo Tintoretto, Paolo Veronese, and Titian onward to Giambattista Tiepolo and the great landscape painters of the 18th century. In addition to several sacred works, you can also have the chance to view the testimonies about the life and customs of the Venetian past, including genre scenes by Pietro Longhi and the veduta of Guardi and Bellotto.
After the visit to the Accademia Gallery, the tour continues with a guided walk through the Santa Croce and Dorsoduro districts, beautiful areas generally not included in the typical tourist itinerary of Venice.
You will walk through Campo San Barnaba, Ponte dei Pugni and the San Sebastiano area, leading up to San Trovaso, where you will admire one of the last squeri that still operate in Venice. The squero is a small shipyard where gondolas - the symbol of Venice - are built. Here, you can see from the outside one of the most hallmark locales of Venice listening to the explanations of our local guide!
The tour ends at San Trovaso. Before returning to your hotel, we recommend you continue your visit of the Dorsoduro district independently, to the nearby Fondamenta delle Zattere, which offers a splendid view of the canal and the island of Giudecca. Or simply stroll along the quiet alleyways of the district to admire the fascinating everyday life of a city where time seems to have stopped centuries ago.