Everything from airfares to public transit, train stations to taxis

In San Gimignano
In general

Getting to San Gimignano by escorted tour

Planning a trip to San Gimignano

How to get to San Gimignano, Italy, by train, car, bus, or tour

How to drive to San Gimignano

Sleeping in couchettes on overnight trains

Getting to Italy and getting around Italy: trains, planes, rental cars, low-cost airlines and long-distance coaches

Taking the slow boat to Europe: Crossing the Atlantic by cruise boat from $650

Obey the speed limits of pay the (high) price

How to get the best deal on plane tickets to Italy

Tips on having the most comfortable air travel experience possible, from getting to and from the airport to picking the right seat on the plane

Aggregators search all the booking engines, airline sites, travel agencies, and airfare discounters in the blink of an eye

Not a tour, but a bundle of airfare, lodging, maybe a car all at wholesale rates

Hints, tips, resources, and pointers for getting your own set of wheels in Italy

Hints, tips, and advice for renting a car in Italy

How to get the best airfare every time

Why pay retail when wholesale airfares to Italy are available?

Italian road rules are similar enough to North American ones that you'll get by fine; here are the important differences

Should I rent a car?

When to book airfares

Truth is, there is no cure for jet lag—but there are 7 ways to make jet lag easier to bear and quicker to dissipate

When to book airfare

Renting a car and driving in Italy

If it's one of the seven deadly sins—gluttony (booze; food), greed (gambling), sloth (spas), extravagance (shore excursions)—it's how a cruise lines makes all its profit

When NOT to rent a car

Keep to the right

Fly across Europe for as little as $25—welcome to the wonderful age of no-frills airlines, the little jet engines that could

Are cruises safe? Can I cancel a cruise? Can I get cruise cancellation insurance?

Airport tips, jet lag, and 24 tips for sleeping on board the flight

From fare alerts to e-savers, deals newsletters to price predictors

Time zones in Italy and dealing with the 24-hour clock

Cruises to or from Italy

Get ready to do some math in your head

What is carry-on size?

If your bag measures more than 45" total (L+W+D), it is probably too big for the overhead bin

How to arrange for a short-term lease on a brand-new car in Italy—cheaper than a rental for longer periods, and far better insured

London is the cheap airfares turnstile of Europe, so fly cheaply into here and then elsewhere in Europe or North Africa on a no-frills airline for far less

Camping is a great way to see Italy, but you needn't be tied down to tent pegs; RV rentals are as easy in Europe as they are here at home

Many Italian cities are now closed to non-resident cars

Where to park legally in Italy (white stripes: free; blue stripes: paid; yellow stripes: off-limits), how to use a disco orario parking disk, and how to avoid fines and getting towed

You do not technically need a IDP for Italy, but consider getting one

Don't leave anything visible in the car

Roundups of deals and sales from many sources

Stay safe while driving a motorino in Italy

Miles and kilometers, feet and meters, and so on

When to go to Italy

The best time to go to Italy — Seasons, weather, and other considerations

Independent Trip to San Gimignano from Florence with Private Transport
4h | from €66
Book it
Explore this delightful Tuscan village in total freedom! Walk along its picturesque Medieval streets, discover its wonderful squares and experience the unique charm of an ancient town like no other!

San Gimignano is a wonderful hilltop town, surrounded by enchanting rolling hills and vineyards where the famous Vernaccia white wine is produced! Meet your private driver at your Hotel and get ready for a wonderful visit experience!
The hamlet is famous for its perfectly preserved historical center and its unique skyline, characterized by thirteen Medieval towers (which once were 72!), hence its particular name of Manhattan of Middle Age. Exploring the city center you can find many examples of Romanesque and Gothic architecture and have breathtaking views over the surrounding countryside! Walk in the town center means discovering true jewels of art, among which Piazza della Cisterna, the Dome, Palazzo del Podestà and the Church of Sant'Agostino. Dont forget to have a delicious Italian gelato in one of the typical ice-cream parlor located its lively squares and if you like wine, dont miss a stop at the Vernaccia Wine Museum (entrance not included)!
At the end of the tour, you will meet again your personal driver to comfortably return to Florence. 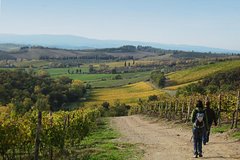 Private Tour: Guided Hike in Tuscany with Transport from Siena
7h | from €104
Book it
Explore Tuscany's picturesque rolling hills on a private, full-day hiking tour with transport from Siena. With your expert guide, enjoy a scenic, full-day adventurous hike through the beautiful Chianti region in Tuscany, full of lush vineyards and quaint villages, stopping halfway to relax over a picnic of classic Tuscan specialties. Continue in the afternoon by minivan to the medieval hill town of San Gimignano for a walk around its UNESCO World Heritage-listed city center. Spend time at your leisure in this gorgeous town before a relaxing drive back to Siena.

Leisure time in the fortress 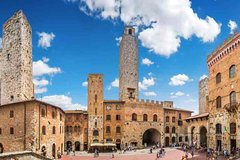 Visit the middle age stronghold of Castellina in Chianti. And walk trough its main streets. On the way admire the scenic "Chiantigiana" views. 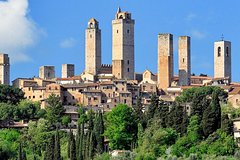 Private Tour: Siena, Monteriggioni, San Gimignano, and Chianti Day Trip from Florence
10h | from €130
Book it
Enjoy a full day of exploring the landscapes and artistic small towns Tuscany offers with this private 10-hour trip to Siena, Monteriggioni, San Gimignano and Castellina in Chianti from Florence.
Wine Tasting in the Tuscany countryside included!
Visit each city in a self-guided fashion at your leisure, with transportation taken care of.
Upgradable with a local private licensed guide.
Pick up and drop off will be at your accommodation in Florence.

Start after being picked up from your accommodation in Florence at 8am.
A professional English-speaking driver with a private air-conditioned minivan will be with you during the entire day and since the tour is private youll be able to customize the itinerary.
Wine Tasting in the Tuscany countryside included!
If you wish, you have the option to include a local private licensed guide in Siena, Monterigioni and San Gimignano.
You can also decide to go for a good lunch (not included) in a local restaurant in one of the towns, and your driver can easily take you there.
The stops youll be able to make during your tour will be to visit Siena, Monteriggioni, San Gimignao and Castellina in Chianti if time allows.
Siena:
The historic center of Siena has been declared by UNESCO a World Heritage Site. Siena is famous for its cuisine, art, museums, medieval cityscape and the Palio, a horse race held twice a year. By walking around the town youll be able to enjoy the main attractions from the outside.
Monteriggioni:
Monteriggioni is a medieval walled town, located on a natural hillock, built in 121419. During the conflicts between Siena and Florence in the Middle Ages, the city was strategically placed as a defensive fortification. It also withstood many attacks from both the Florentines and the forces of the Bishop of Volterra.
San Gimignano:
San Gimignano is one of Tuscanys prettiest and most famous small medieval hilltop towns. With a name that translates as the Town of Fine Towers, its best known for its well-preserved medieval towers and encircling walls, which give it an unmistakable skyline. Inside the walls, its impressive buildings include notable examples of Romanesque and Gothic architecture.
Castellina in Chianti:
Before your return to Florence, travel through the Chianti region to check out Castellina. The quaint Etruscan village is home to a fortress that dates back to the 15th century.
At the end of the tour the driver will take you back to your accommodation in Florence.

"Airplane travel is nature’s way of making you look like your passport photo."
— Al Gore