In Salerno
In Italy

Planning a trip to Salerno

How to drive to Salerno

more
Transport
In Salerno
In Italy

Obey the speed limits of pay the (high) price

Italian road rules are similar enough to North American ones that you'll get by fine; here are the important differences

Should I rent a car?

Renting a car and driving in Italy

When NOT to rent a car

Keep to the right

Get ready to do some math in your head

Where to park legally in Italy (white stripes: free; blue stripes: paid; yellow stripes: off-limits), how to use a disco orario parking disk, and how to avoid fines and getting towed

You do not technically need a IDP for Italy, but consider getting one

Don't leave anything visible in the car 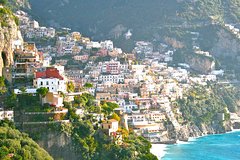 Best of Amalfi Coast Full Day Private Shore Excursion from Salerno Cruise Port
8h | from €87
Book it
Meet our English-speaking driver at 8.00am at the cruise ship terminal of the Salerno port and be ready to visit the best of the Amalfi coast in this full day driving tour along the cliffs above the sea in a private first class minivan.
You will see the city of Amalfi, the pearl of the coast Positano and Ravello. The tour will last more or less 8 hours and you will enjoy free time to walk around the narrow streets of the Medieval towns that once ruled the trade over the Mediterranean Sea.
Breath-taking views, picturesque landscapes and lemon trees smell  what else to make your day special!

Our English-speaking driver will welcome you at the cruise ship terminal of the Salerno port, holding a sign with your surname.
You will be travelling on a first-class car or minivan to make your visit more comfortable and your driver will be happy to assist you, so do not hesitate to ask for help and suggestions.
Driving from Salerno, you will first visit Amalfi. An independent republic since the VII century, the city became famous in Medieval time as one of the four maritime republics with Pisa, Genoa and last Venice. Its powerful trade over the Mediterranean Sea lasted till the XIII century, when conquered by Pisa, an event that determined the collapse of the economical power of the region.
The must-see of Amalfi is the marvelous cathedral facing the sea. Its Romanic style reflects the order of the Norman domination on the South Italy. Enter the Chiostro del Paradiso, a burial ground for the aristocrats of the city, but also an open-air museum collecting two Roman sarcophagi with depictions of the Rape of Proserpina and the Marriage of Peleo and Thetis. Once outside the cathedral do not forget to go and taste some fresh, homemade limoncello in one of the many factories.
You will then drive to Ravello, another small town next to Amalfi. During the Medieval age it became really important for the Dutch of Amalfi for the great production of wool designated to the oversea trade, and it was mostly inhabited by the aristocratic families of the time, whose buildings still carry their names: Rufolo, dAflitto, Confalone.
Last but not the least, you will reach Positano, the jewel of the Amalfi coast. The town was named after Poseidon, the God of the Sea. Its popularity increased during the Medieval Age, when it became an important port for the Amalfi Republic. Famous above all for its beaches and clear waters  the Marina Grande beach above the others  Positano surely has more to offer to tourists. Visit the beautiful Church of Santa Maria Assunta and be enchanted by its dome, whose tiles are made from majolica.
Lemon leaves, dramatic and picturesque glimpses, high cliffs over the sea, deep blue water. Enjoy this full day driving tour on the road that has become one of the UNESCO World Heritage sites.

A ship in a harbor is safe

“A ship in a harbor is safe, but it not what ships are built for.”
— John A. Shedd