Etruscan sarcophagus, with a terracotta couple, from the 7C BC

An antiquities museum in the Villa Borghese park

The Villa Giulia museum houses miles and miles of Etruscan vases and other antiquities in a villa built in 1551 by a trio of top High Renaissance architects: Vasari, Vignole, and Ammannati.

It's well worth it for the Classically inclined, but if you find ancient statuary and art a snooze-fest, you can skip it.

Photo gallery
Rome tours
Popes, Power, and Parties: the Renaissance in Rome
3 hr | from €377
Book it
During the Renaissance, powerful families from all over Europe descended upon Rome in order to be closer to the Vatican and Catholic Church. They erected magnificent palaces, paved streets, and commissioned such artists as Michelangelo and Raphael to create beautiful testaments to their power and prestige. During the course of this three-hour Rome Palazzo Tour, we will plunge ourselves into this world, exploring the great palaces of the Renaissance with an art historian while discovering exactly how art and power went hand-in-hand during 1500s Rome. Rome Palazzo Tour We'll spend the first part of our time together in an area of central Rome near Campo de' Fiori where several important families from northern Italy built their palaces in the early years of the 1500s. Here, we'll encounter a number of very significant artists and architects, including Bramante, Raphael, and Michelangelo, while our docent helps frame some of the basic concepts that informed the work of these thinkers, including a revived interest in antiquity and developments in mathematics and philosophy. We'll also look at the social and political developments in Rome during this period, as each family vied with the other for the ultimate position of power: the papacy. The Farnese Family Our walk will then take us through Piazza Farnese, site of the imposing Palazzo Farnese, the historical home base of the Farnese family, the wealthy clan that counted Pope Paul III among its members. Designed in part by Michelangelo, Palazzo Farnese is a supreme example of a noble Renaissance palace and is recognized as one of the most majestic and graceful structures in the city. It also exemplified the prestige of the Farnese and will lead us to a discussion of how art and power intersected here and elsewhere (a topic further explored on our Rome Art and Propaganda Tour). A Walk Through History Our stroll through the rest of this neighborhood may include any number of other 16th and 17th century mansions, including the Palazzo Cancelleria, a milestone of Renaissance architecture. Along the way we'll discuss the life and lifestyle of the aristocracy, including the lavish balls and parties that were thrown here and that figured critically into the larger political landscape of the city. We will pass through many significant streets of the city, too, most of which date to the late medieval or early Renaissance period, including the Via Giulia, arguably the most important street in Rome, designed by Bramante. A Closer Look The second half of our tour will focus on one of the best preserved Renaissance homes of the period, the Villa Farnesina. Built by Agostino Chigi, a wealthy Sienese banker who underwrote much of Pope Julius' enterprises (including the Sistine Chapel), the villa today boasts an array of important artworks. Among these are two major pieces by Raphael: “The Triumph of Galatea" and the amazing "Cupid and Psyche" ceiling fresco cycle. Quiet and rarely visited, Villa Farnesina will also afford us the opportunity to get close to the art that drove the Renaissance. Wrapping up, we will explore how the Villa Farnesina exemplifies the themes we will have explored on this tour: an interest in antiquity, the intersection of power and art, and the presence of the Church in everyday life.
Partner 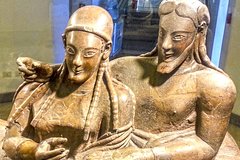 Skip-the-line guided tour of the National Etruscan Museum of Villa Giulia in Rome
2h 30m | from €59
Book it
Visit the most important Museum of Etruscan art and history in the world on this exclusive 2.5 hour tour led by a top-rated local guide. You will enjoy famous masterpieces including Veius Apollo, Pyrgy Golden Tables, Newlyweds Sarcophagus and many more. It will be an unforgettable journey through one of the most mysterious and influential civilizations of Ancient Italy. It is a private tour and the guide will be exclusively at your service answering all your questions and using ipad and multimedia tools to make you relive the past.

Discover the masterpieces of the Etruscan civilization, the dominated central Italy before the Romans expansion. Visit the most important Etruscan museum in the world housed in the precious Villa Giulia. This was the lavish XVI century residence built by Pope Julius III with spectacular frescoes, statues and gardens.
On this 2.5 hour tour led by a top-rated local guide you will see some of the most interesting Etruscan artworks collected in the Villa. You will be impressed by the goldsmith precision of the Pyrgi Tablets, the fine craftmanship of the Spouses' Sarcophagus and the impressive ruins of the Veius Temple with the exquisite statue of Apollo.
You will feel like jumping back in time to  X century bC Italy learning about history customs, traditions and art of the Etruscans. Your guide will make your experience truly interactive by using Ipad and other multimedia and visual tools to relive the past.

Also in Outside the walls

"Airplane travel is nature’s way of making you look like your passport photo."
— Al Gore