This 15th-century Trastevere palazzo at the foot of the Gianicolo Hill served as a time as the palace-away-from-home for Queen Cristina of Sweden, who abdicated her throne, converted to Catholocism, and lived in Rome—on and off—from 1654 until her death 1689.

Palazzo Corsini now houses the original half of Rome's National Gallery of paintings (the other half's in the Palazzo Barberini, near Via Veneto).

The paintings are hung sort of all squished together, but its worth a visit for some surprisingly big names—surprising because barely anyone even knows this painting gallery exists.

Interestingly, two of the best works—by Caravaggio and Guido Reni—provide bookends to the life of John the Baptist.

The John the Baptist paintings

Caravaggio's St. John the Baptist (1603) presents the future saint in one of Caravaggio's favorite subjects (both on and off the canvas): a nubile youth, gazing from under a shaggy mop of boy-band hair as an oversized, heavy red robe or blanket slips off. Is he just sitting up, or lying down?

Guido Reni is—unusually for him, but appropriately for our comparisons here—using a carvaggiesque chiaroscuro pallete in his Salome with the Head of St. John the Baptist, painted some 30 years later around 1630–35. That nubile boy has grown to a dour old holy man, a bit bedraggled from years of living in the wild, performing baptisms. Or at least that's how his head looks.

According to the gospels, John the Baptist met his end by angering Heriodas, the queen. He denounced her second marriage to her half-uncle/brother-in-law, King Herod Antipas (the Herodian Dynasty of Judaea had rather tangled family trees).

Herodias had her daughter, Salome, come and perform a dance for her new step-father/half-uncle, and he was so smitten he immediately promised her anything she desired.

Salome consulted with her vengeful mother, who told her to ask for John the Baptist's head on a platter. Conveniently, John was already in prison, so the king—reluctantly, but oath-bound—obliged and presented Salome with the poor saint's head on a silver charger.

Somehow, this has led to Salome being tarred as one of history's great seductresses, when the gospels, if anything, make her out only to be a pawn in Herodian family politics. All she did was dance.

(And it's only the gospels that we find the story—Mark 6:21-29 and Matthew 14:6-11, if you're interested. Contemporary historical accounts only note that Heriodas had a daughter, and make no connection with the life—or death—of the Baptist.) 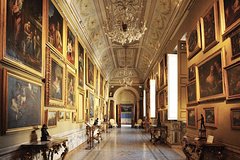 Corsini Palace and Gallery in Rome Private Skip-the-line Tour
2h 30m | from €29
Book it
Visit the incredible Corsini Gallery on this private, 2.5-hour tour led by a local guide. Explore all of the rooms of the gallery and enjoy the masterpieces by Caravaggio, Van Dyck, Rubens and many other superb European painters of the 16th and 17th centuries. Your private guide can customize your tour to your preferences and answer all of your questions.

Meet your guide at the ticket office of the Corsini Gallery in Trastevere to begin your tour. During your 2.5-hour tour, you will visit each of the rooms of the gallery to explore the amazing collection of 16th and 17th century paintings.
You will see works by Caravaggio, De Ribera, Bassano, Poussin, and Van Dyck, among many others. Throughout the tour, your guide will incorporate multimedia tools to make your experience even more engaging and can also customize your experience and answer all of your questions.
After your 2.5-hour tour, bid your guide farewell and continue exploring on your own.

Get into Galleria Corsini for free (and skip the line at the ticket booth) with:

» more on discounts & passes
How long does Galleria Corsini take?

Figure on spending 45–90 minutes in the museum, depending on how much you like art.

(Also, expect it to take a bit longer than you'd think, since you have to spend some time matching up paintings to the corresponding little maps of the walls in each room so you can identify works; they aren't labeled as in a modern museum—though occasionally a frame will have a tiny ID plaque nailed to it from a century or two ago).

The ticket desk closes 30 minutes before the museum.

Rome's Palazzo Barberini serves as half of the Galleria Nazionale d'Arte Antica, a collection of Old Masters from Raphael to Caravaggio

A ship in a harbor is safe

“A ship in a harbor is safe, but it not what ships are built for.”
— John A. Shedd