The sad story of the Santo Bambino at the Capitoline church

Santa Maria in Aracoeli is an ancient church. It was already old when it was first mentioned in the 7th century, but its current incarnation dates back to the Franciscans and AD 1250, with the thigh-burning 124-step staircase completed in 1348.

Legend holds that the Tiburtine Sibyl told Emperor Augustus that on this lofty spot—today wedged between the Vittoriano and the Capitoline Museums atop the Capitoline Hill—would be an "altar to the first among gods," whereupon the emperor had a vision of the heavens opening up and a woman bearing a child in her arms alight on the hilltop.

Augustus dutifully built an aracoeli, or "Altar in the Sky" up here, but Christians later interpreted the prophecy as a reference to their God and replaced it with a church.

Inside the church of Santa Maria in Aracoeli

Up the incredibly steep and seemingly unending staircase—sort of a medieval Stairmaster workout—and past the unfinished facade of rough brick is a Romanesque interior hung with crystal chandeliers and slightly baroqued.

It does, however, retain a Cosmatesque pavement and 22 mismatched antique columns recycled from pagan buildings. The elegant wood ceiling is carved with naval emblems and motifs to commemorate the great naval victory at Lepanto (1571).

The worn tomb of Giovanni Crivelli to the right of the door was cast by Donatello, and the first chapel on the right was frescoed with the Life of St. Bernardino of Siena by Umbrian Renaissance master Pinturicchio, one of his greatest masterpieces. There's also a scrap of a Madonna and Child fresco by Roman medieval master Pietro Cavallini, one of his few surviving works.

To the left of the altar with its 10th-century Madonna d'Aracoeli painting, is the chapel that once housed a highly venerated statue of the baby Jesus called the Santo Bambino.

It was supposedly carved from an olive tree in the Garden of Gethsemane and imbued with miraculous powers to heal the sick (he spent half his time making the rounds of Rome's hospitals to visit the sickbeds of the terminally ill), and answer the prayers of children.

The Bambino received thousands of letters from around the world every year—most addressed simply "Santo Bambino, Roma"—which were left in his chapel, unopened, until they were burned so the prayers in them could waft heavenward. Roman children came to recite little speeches or sing poetry in front of the holy little statue, especially at Christmastime.

The Santo Bambino was stolen in 1994. It has since been replaced by a copy. 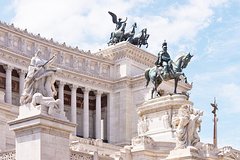 Vittoriano Piazza del Campidoglio & Santa Maria in Aracoeli Guided Tour in Rome
1 hour 30m | from €30
Book it
Take this 1.5 hour guided tour for a journey through Italian history!
Learn about one of Rome most spectacular monuments: the Vittoriano. This huge modern building is symbol of the Independence of Italy and represents its values, regions and people. Your local expert guide will explain every detail of the building, its history, secrets, anectodes with the help of multimedia tools and visual reconstructions.
From the top of it you will reach Capitol Hill and the Church of Santa Maria in Aracoeli. It is the place of the city  where the Ancient Romans built the most important temples to Jupiter and Juno. You will see Marcus Aurelius horse statue, the Town Hall, Michelangelo's square and other great artworks.

(no rating)
Rome Holiday Walk: The Tradition of Italian Nativities
4 hr | from €377
Book it
Christmas in Rome has always been a spectacular time of year. Steeped in tradition, most churches display elaborate nativities for veneration during the Christmas season. On this three-hour Rome Christmas tour, we will explore the city's magnificent holiday displays, from the church of St. Mary Major to the church of San Cosmas e Damiano, visiting several other important sites in between. Led by a theologian, we will explore the meaning and function of these relics and nativities and how they relate to the Christmas tradition. Rome Christmas Tour We begin at the church of St. Mary Major, where relics of the Christ child's manger, normally covered by Pope Pius IV's reconstruction of the high altar, are revealed during the Christmas season. We will also discuss one of the oldest nativity scenes in Rome, carved in marble by Arnolfo di Cambio in 1280. Depicting the arrival of the Magi, the scene was almost entirely destroyed during the 16th century when Pope Sixtus V ordered it moved. The remaining figures, all beautifully carved, can be viewed only during the holiday season. World-Renowned Nativities We then continue through the Monti neighborhood where we may stop for a coffee and traditional Christmas pastry, such as pangiallo or torrone (nota bene, we try more seasonal treats on our Rome Holiday Food Tour). As our time in Monti ends, our discussion culminates in the viewing of two of the most breathtaking and well-known Nativity Scenes in Rome. The church of San Cosma e Damiano annually displays its Nativity, a stunning artistic achievement that ranks among the largest in the world. Finally, we'll visit Santa Maria in Aracoeli, which exhibits a more understated but no less beautiful Nativity that, from Christmas Eve onwards, includes the Santa Bambino, a sculpture of the Christ Child carved from olive wood.
Partner

Christmas Nativities and Angels Tour in Rome
4h | from €60
Book it
Enjoy the history and the legends of this magic town following Christmas trees, Christmas nativities and famous sculptures of Angels scattered around the city.

Christmas in Rome is magical and there is no reason not to take advantage of this opportunity to be fascinated by the iconic stories about the city.
This tour will offer you historical information and traditional tales walking through the famous churches and squares decorated for the Christmas period.
Start in Piazza del Popolo where you will discover the Twin Churches and their Christmas Nativity. Crossing Piazza di Spagna, you will arrive at the small Italian Lourdes, the Church of Santa Maria in Via, where you will enjoy the miraculous holy water.
After admiring the decorations and anecdotes related to the history of Piazza Venezia, admire the majesty of the Church of Santa Maria in Aracoeli and the Holy Child, a sculpture baptized in the river Jordan that in the Christmas period is in the middle of the Christmas nativity scene. Stop in Piazza Navona, then cross the bridge of the Angels and end your tour in the center of the Catholic world in Piazza San Pietro.

Vittoriano Santa Maria in Aracoeli and Capitol Hill Small Group Tour in Rome
1 hour 30m | from €30
Book it
Take a journey through Italian history and symbols on a fantastic 1.5 hour guided tour!
Learn about one of Rome most spectacular and famous monuments: the Vittoriano. This huge modern building is symbol of the Independence of Italy and represents its values, regions and people. Your local expert guide will explain every detail of the building, its history, secrets, anectodes with the help of multimedia tools and visual reconstructions.
From the top of it you will reach Capitol Hill and the Church of Santa Maria in Aracoeli. It is the very center of the city  where the Ancient Romans built the most important temples to Jupiter and Juno. You will see Marcus Aurelius horse statue, the Town Hall, Michelangelo's square and other great artworks.

See the balcony from where Mussolini, the Duc, spoke to people 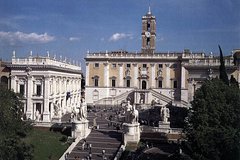 Rome Capitoline Museums Skip-the-Line Tour with Capitoline Square
3h | from €35
Book it
Enjoy a 3-hour guided tour of the unique museum founded by Pope Sixtus IV and admire the stunning bronze sculptures of the emperors of Rome. Explore the entire Capitoline Hill complex, designed by Michelangelo, as your guide brings the past back to life. This small group tour is guaranteed to skip the lines!

Visit the Capitoline Museum founded by Pope Sixtus IV, and admire paintings by Caravaggio and other masters.

From the top of the hill, youll have a panoramic view of Rome that includes the domes of Sant'Andrea della Valle and San Pietro

meet your guide at Piazza del Campidoglio, under the Marco Aurelio statue, where youll begin your amazing journey through the history of the Capitoline Hill complex, including the Capitoline Museum and St. Mary of Aracoeli Basilica.
Your professional guide will tell you how the construction on Capitoline Hill began, and how Michelangelo was commissioned by Pope Paul III to design the square.
The first square of modern Rome was created by the genius of Michelangelo, rising on the Capitoline Hill, on the site of an old village and the place dedicated to numerous temples to the Roman deities.

Step inside Santa Maria in Ara Coeli, built on the ruins of the Tempio di Giunone Moneta. Its name derives from a legend according to which a sibyl predicted the coming of the son of God, saying: Haec est ara filii Dei. This is the highest peak of the Campidoglio Hill. 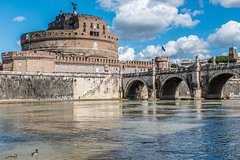 Private Rome Off the Beaten Path Tour: Discover its Overlooked City Center
3h 30m | from €345
Book it
Discover Rome off the beaten path and uncover the secrets of Campo de' Fiori, the Jewish Ghetto and other Roman gems during this tour. Your personal guide will tell you all about the dramatic events and scandals that shaped Rome over the centuries. Enjoy the beautiful views on the city while having a stroll in the back streets of Rome. 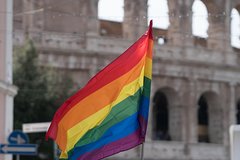 Rainbow Tour: the Secret Gay History of Rome
3h | from €49
Book it
Learn about Ancient and modern Roman history as only a gay-friendly guide can tell it!
Your tour begins at the spot where Julius Caesar was betrayed and killed. Then, walk along the imperial Forum - the political and social heart of the Roman Empire. Learn about Julius Caesar and how homosexuality was viewed socially in Ancient Rome.
At the Capitoline Hill, climb 124 marble steps to reach the Basilica of Santa Maria in Ara Coeli where we'll come across a lesser known sight: the simple tomb of Michelangelo's young lover.
From here, you'll walk over to "Opium Hill" where you will visit the Basilica of St. Peter in Chains. Inside, encounter one of Michelangelo's most celebrated sculptures: the horned Moses.
Finally, stop for a drink with your group and guide at a famous gay pub on Rome's "Gay Street" while enjoying the view of the Ludus Magnus -- the ruins of the Gladiator school.

Learn about the death of Julius Caesar.

View of the Vittorio Emanuele building.

Visit of the Basilica and tomb of Francesco Braccio.

View of the city center of Rome.

Walk along Via dei Fori Imperiali and learn about Julius Caesar and homosexuality in Ancient Rome.

Seen on our walk.

Visit of the church where we'll find the relic of the chains that were said to bind St. Peter while he was imprisoned in Jerusalem as well as Michelangelo's Moses.

Gladiator school, located on Rome's Gay Street. Final stop where we'll enjoy a refreshment and the views over the ruins of the Gladiator School and the Colosseum.

Views over the colosseum.

How long does Santa Maria in Aracoeli take?

You can wander the church in a quick 20 minutes—plus another 10 just to get up the stairs!