Pasquino, near Piazza Navona, is the most famous statua parlante (talking statue) of Rome

The Pasquino is the most famous of Rome's "Talking Statues"

This ancient, ruinous statue of an anonymous Roman warrior has for centuries served as the voice of Rome's witty oppressed—sort of the editorial essays and political cartoons or the era—a political soapbox for those who've wanted to voice their opinions anonymously by writing them on plaques hung around the statue's neck. These even have a name: Pasquinades.

(The Pasquino himself is named after one of the earliest and most famous of these Roman wags, a late medieval agitator who, though anonymous, was widely known to be a local barber named Pasquino.)

One of Pasquino's most famous quips had to do with the nearby Pantheon—famously such a gorgeous ancient temple that not even the barbarian hordes of the Dark Ages avoiding sacking it. However, when in 1623 Barberini Pope Urban VIII removed the bronze revetments from the nearby Pantheon's portico, melting them down to make Bernini's baldacchino in St. Peter's and canons for Castel Sant'Angelo. Pasquino was quick to comment: "Quod non fecerunt Barberi, fecerunt Barberini," ("What even the barbarians wouldn't do, Barberini did.")

(The pope also later had Bernini add two squat turrets to either side of the Pantheon's pediment, eyesores which Pasquino quickly dubbed "Bernini's ass's ears.")

The Pasquino tradition is by no means dead—though Latin is rarely used these days, and it has evolved into pasted-up computer print-outs and scrawls of graffiti on the surrounding walls. (Though of late, most Romans have learned simply to paste papers to Pasquino's pedestal, or on a board leaning against the wall.)

Pasquino and his friends (the fellow statue parlanti) continue to hold forth on everything from Italian popular culture to political scandals to the European financial crisis.

A few years ago, the Palazzo Braschi against which the Pasquino stands was being worked on. As work began, the workmen erected—as they usually do on such jobs—a plank board wall all around the base of the building. Within days this wall was slathered in posters, papers, and graffiti, most with messages along the lines "Help, I can't see!" and "Hey, where did everybody go?" and "You cannot silence Pasquino!"

By the following week, workers had re-jiggered the wall so that it tucked in to either side of Pasquino, revealing him to the public once again and allowing him to hold forth in freedom. 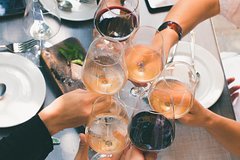 Tasting of biodynamic and natural wines
1 hour | from €45
Book it
With this tasting we want to promote and explain the concept of "natural" and "Biodynamic" in the world of wine. The return to the land, to nature, that many local producers throughout Italy have undertaken, trying to maintain a balance between product and "terroir". We will taste 3 wines, combining them with local cheeses, trying to reveal every detail.

With this tasting we want to promote and explain the concept of "natural" and "Biodynamic" in the world of wine. The return to the land, to nature, that many local producers throughout Italy have undertaken, trying to maintain a balance between product and "terroir". We will taste 3 wines, combining them with local cheeses, trying to reveal every detail. 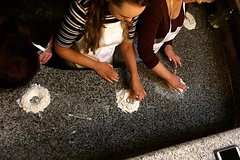 Cooking Class in Rome: Make Your Own Pizza
1–2h | from €49
Book it
Learn how to make a classic Italian pizza during a 60-minute cooking class in central Rome. With all of your ingredients provided, plus the expertise of a professional chef, youll have everything needed to prepare a tantalizing pizza. Finish your session with a pizza dinner and drink, followed by a stroll near the restaurant. 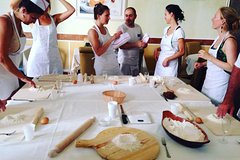 Pasta Cooking Class Experience in Rome
1–2h | from €59
Book it
Learn how to make pasta: Cooking lesson on how to make Italian fresh pasta followed by traditional lunch or dinner. Have a unique opportunity to learn how to make a traditional recipe of homemade pasta in this private experience. Take home a secret about how dough is made and you can tell and relive it with relatives and friends. Spend a pleasant morning or afternoon, different from any other, characterized by a homemade atmosphere in the Center of Rome. Having fun together, bring to the table a good plate of pasta made by your hands. This cooking class offers you the chance to learn the traditional recipe, and will give you the desire to cook at home! Choose from one of two departure times when you book. 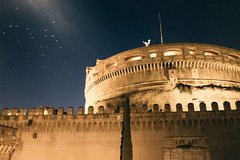 Rome Ghost's Tour
2h | from €135
Book it
discover the misteries and the legends of Rome, listen the history behind the magnificent buildings of central Rome with our expert, English-speaking storytellers, we will guide you to the most fascinated corners of the eternal city, telling you the stories of ghosts such Beatrice Cenci or the terrible Borgia Pope.

We will visit the square discovering Cagliostro's ghost 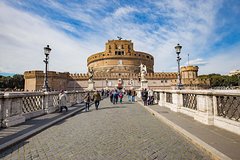 Ancient Rome Treasures Walking Tour: The Borgia Family and its Secrets
2h | from €95
Book it
Enjoy the first and exclusive private walking-tour based on the treasures left by one of the most powerful and controversial roman families: the Borgias.
Be part on a 2-hour guided tour in a small-group led by a professional guide through Rome.

The Borgias: rich, famous, powerful and controversial, one of the roman families that have inspired books, romances and lately a TV series.
In 1492 a Spaniard became Pope: Rodrigo Borgia, who took the name of Alexander VI. The Pope dedicated himself exclusively to "fix" his family; infact he sent his son Cesare Borgia, Valentino, to expand the borders of the papal empire, under the cry "the end justifies the means"; and he also tried to find a husband to his daughter Lucrezia. Around this family, revolve women of power, like Vannozza Cattanei, Giulia Farnese and Fiammetta, who will inaugurate the golden age of courtesans. Our walk through the spectacular scenery of Rome at sunset, will trace the history and places that saw the protagonist one of the families most controversial in history.
A local professional guide will introduce you on this 2-hour walking tour: start from the famous Castel Sant'Angelo, gaze at the interesting Palazzo Sforza and admire the statue Pasquino; be able to see one of the most visited square in Rome Campo dei Fiori, until to reach via Giulia.

How long does The Pasquino take?

Not much time is needed to view this sight. Take a few minutes to read the banter and messages from the statue to the city.

The Capitoline Museums, a Michelangelo-designed piazza, and killer views atop Rome's Campidoglio

A journey of a thousand miles

“A journey of a thousand miles begins with a single step.”
— Lao Tzu