The new home to the famed Ludovisi and Mattei collections of ancient sculpture is a crown jewel in Rome's touristic renaissance, and a prime example of Italy's seemingly newfound ability to craft a 21st-century museum that respects both the gorgeous architecture and frescoes of the Renaissance space in which it is installed, and the aesthetic and historic value of the classical collection it contains.

Rather than stuff lots of statues into every nook and cranny of this Altemps space, they've placed just a few choice pieces in each room, allowing and encouraging you to examine each statue carefully, walk around it, and read the accompanying placard in English and Italian that explains its significance and shows which bits are original and which were "restored" in the 17th century.

The 16th- to 18th-century palazzo itself is gorgeous, with a grand central courtyard and many surviving frescoes and original painted wood ceilings, especially upstairs, where you can wander onto a bust-lined, Alberti-inspired loggia frescoed as a "Garden of Delights" in the 1590s.

The collections mix Roman originals with many Greek, Hellenstic, or Roman copies of Greek works, as well as a handful of older Egyptian sculptures collected by the ancient Romans.

Best of the museum collections

Be on the lookout for an AD 2nd-century giant Dionysus with Satyr; 2nd-century BC Ptolemaic Egyptian statuary; a pair of lute-playing Apollos; and plenty of Imperial busts.

There's also a 1st-century BC copy of master Greek sculptor Phidias' most famous statue (now lost): The 5th-century BC Athena that once held the place of honor in Athens' Parthenon (pictured above).

One touching piece is the Ludovisi Gaul in the act of commiting suicide while he holds the arm of his dying wife.

This is a Roman copy of a Hellenistic original, which was commissioned by Attalus I of Pergamon for a monument he had built around 220 BC to celebrate his victory over Galatia (modern-day Anatolia, Turkey—though most commonly associated these days with the area we now call France, the Gauls—a Celtic people—had actually settled much of Europe, the Balkans, and Turkey by the 3rd century BC).

My favorite piece is an AD 3rd-century sarcophaguscarved from a single block of marble and depicting in incredible—and, incredibly, un-restored—detail the Roman legions fighting off invading Ostrogoth Barbarians.

The royal guy in the middle of the top row, directing the battle, probably represents Hostilian, son of Emperor Decius.

This is both ironic and sad, since is was his father and older brother Herennius Etruscus (already named co-emperor with their dad) who actually fought the barbarian armies at the Danube frontier—and earned themselves the distinction of being, in AD 251, the first Roman emperors to be killed in battle by a foreign enemy (on the same day, no less).

Hostilian had been left at home as he as too young to go to war. He enjoyed the imperial throne he inherited for only a few months before succumbing to a plague that swept Rome. He was probably only 20 or 21 at the time. 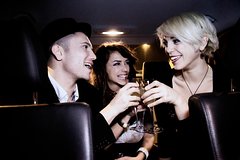 Following a pickup from your hotel, learn the legends of Janiculum Hill, and marvel at the courtyard of the Church of San Pietro in Montorio, considered a masterpiece of High Renaissance architecture. Be enchanted by the impressive Fontana dell'Acqua Paola, called Er Fontanone by the Romans.
Next, walk along the River Tiber to Piazza Navona. Built on the site of the Stadium of Domitian, the oval-shaped square is a feast of Baroque and Renaissance art, including Berninis famous Fontana dei Quattro Fiumi (Fountain of 4 Rivers). Nearby, lies the Palazzo Altemps and Palazzo Braschi.
Continue to the Trevi Fountain, featured in the Federico Fellini film La Dolce Vita. Throw a coin in the fountain, before driving on to the Colosseum and Circo Massimo. From there, its a short journey to the Villa del Priorato di Malta on Aventine Hill, where you can admire St. Peter's Basilica through the keyhole of the Villa Malta.
A tour guide is not included, a suggestion may be to bring a guidebook. Remember to check the website for opening times of the location and the price of entrance ticket. Entrance fees are not included.

Get into Palazzo Altemps for free (and skip the line at the ticket booth) with:

» more on discounts & passes
How long does Palazzo Altemps take?

Figure on spending about 1 hour to 90 minutes here (ancient history buffs: give it at least 2 hours).

The ticket office closes an hour before the museum.

The world is a book

"The world is a book and those who do not travel read only one page."
—St. Augustine of Hippo