The Foro Boario & the Cloaca Maxima ☆☆☆

The Forum Boarium, with the round Temple of Hercules Victor on the left and the rectangular Temple of Portunus on the right

At the western foot of the Palatine Hill, in the middle of an old boario, or "cow pasture," sit two small 2nd-century B.C. temples.

Sadly, neither temple is open to the public on anything like a regular basis (though the round one supposedly is on the 1st and 3rd Sundays of each month at 11am—which it usually is, though I've also shown up at that time and found it closed.)

This little field lies right in front of the Church of Santa Maria in Cosmedin (famous for the Mouth of Truth on its porch), just down the street from the Theater of Marcellus, and right above the famous Cloaca Maxima.

The Temple of Portunus

The Temple of Portunus—or "Temple of Manly Fortune"—was crafted in the squared-off, Latin style built in the 4C or 3C BC (and refurbished in the 1C BC) and ranks as among the best-preserved temples of Ancient Rome. How did this one survive the centuries largely intact?

Like most ancient temples that are still around, it was converted into a church ("Santa Maria de Gradellis") in 872, and then another one, "Santa Maria Egiziaca," in the 15C.

The Temple of Hercules Victor

The Temple of Hercules Victor—sometimes erroneously said to be the Temple of Vesta, but usually just referred to as the Tempio Rotundo, or "Round Temple"—was built in the late 2C BC in the older, circular Etruscan style and as such ranks as the oldest marble structure surviving in Rome. It was dedicated to "Hercules the Winner," the godly protector of the ancient merchants who plied their trade nearby.

Its 20 Corintihian columns suround a central cella with a statue from the 2C BC by Greek sculptor Skopas Minore and a 15C fresco of the Madonna and Child because, like the other temple, it had long-since been converted into a church—first as Santo Stefano delle Carrozze, then in the 16C as Santa Maria del Sole.

Brave the traffic to cross the Lungotevere and peer down the embankments to where a giant hole empties into the Tiber.

There is is: the world's first major sewer.

Photo gallery
Rome tours
Daily Life in Ancient Rome Tour
3 hr | from €377
Book it
Romulus and Remus myths aside, how did Rome begin? What were the causes of its success? How did normal people live and what was normal life like beyond the dramatic stories of emperors and gladiators? These are the questions we try to answer—and many more—in the course of this daily life in ancient Rome tour, which visits the Foro Boario (cow market), Tiber Island, and several Republican-era temples. See Roman temples and markets Learn about the daily life of ancient Romans Visit less crowded sites Led by a classicist or archaeologist Daily Life in Ancient Rome Tour Led by a classical historian, archaeologist or other scholar of antiquity, this walk takes us beyond the Roman Forum, Colosseum, and other "big name" monuments in Rome to discover an array of less-well-known ancient ruins not normally included in a typical tourist itinerary, but all the more amazing, unique, and critical to understanding Rome and her history. We begin in the Foro Boario, or cow market, of ancient Rome, located along the Tiber River, where we can discuss the importance of the river as a source of trade and the importance of trade to the development of Roman civilization. Although central, this is an area of the city that few people explore. However, it is filled with a tremendous wealth of ancient sites, including over 15 different temples. We'll take the opportunity of being in a less-touristy part of ancient Rome to draw on our docent's wealth of knowledge to have her paint a detailed portrait of Rome's of social and economic life during antiquity. Republican-Era Temples Nearby we'll find several of the oldest structures in Rome, some Republican-era temples as well as the Cloaca Maxima, the great drain (sewer) of ancient Rome. We'll find some comfortable shade and talk about the endeavor of temple building and the role of temples in everyday life. Although it may seem strange, we'll talk extensively about the sewer, arguably one of the most important things ever built in Rome—at least in terms of daily life—and still in use today! Tiber River and Island We'll eventually wind our way across the Tiber River to view the Ponte Rotto, or broken bridge, one of the oldest bridges in the world and filled with vivid stories. Our program will finish on the Tiber Island, a fantastic place to find lunch or dinner. One of the hallmarks of this walk is the wide range of different sites visited. During our time together we'll visit an important early building complex from the Republican era, one of Rome's few surviving quadrifons arches, a circus racetrack, a 2000-year-old bridge, and several temples absorbed by medieval churches over the centuries. It's a bit mix-and-match, but we'll tie it all together to provide a clear picture of what it would have been like during antiquity to live in the greatest city on earth. Core of the Capital Our exact itinerary will vary from day to day, depending on the specialization of our docent and the interests of the group. Often our conversation will center on daily life during antiquity, the evolution of the city from a small trading settlement along the Tiber to the capital of the world, the role of religion and cults, the palimpsestic urban layers that are unique to Rome, or architectural and engineering innovations.
Partner 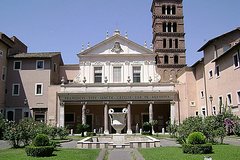 Underground Basilicas and Foro Boario Private Tour
3h | from €280
Book it
Admire Romes underground treasures on a 3-hour, private walking tour. After exploring the ancient cattle market of Foro Boario, youll discover temple ruins, millennia-old bridges, and the streets of Trastevere. Its in this neighborhood that the real gems await. Head underground at the Church of Santa Cecilia and the Basilica of San Crisogono to discover a basement crypt and the remains of an ancient frescoed church.

Head to Foro Boario, the site of an ancient Roman cattle market, to meet your guide. After listening to an intro about the site, and the nearby underground basilicas, youll check out two of the areas significant ruins

Situated in the Forum Boarium

Situated in the Forum Boarium

Take a stroll across Palatino Bridge

gaze at the remnants of the so-called broken bridge, the Ponte Rotto, as you learn of its 2nd-century roots.

From the bridge, continue to Tiber Island, and then walk through Trastevere to visit the 5th-century Church of Santa Cecilia. Take a look at the saints tomb and elaborate crypt, and hear how the modern-day church is believed to have been built on top of the saints home

Your walk through Trastevere finishes at the Basilica of San Crisogono, home to the basement remains of an earlier church with frescoes from Constantine Is reign. Your tour ends inside the basilica. 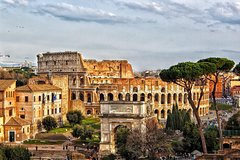 Discover Rome's most beautiful and famous monuments on a full-day shore excursion from Civitavecchia cruise port.
Enjoy the comfort of a private driver transportation with pick up and drop off inside the port, just in front of your cruise ship. Then relax for 1 hour until we reach the city center of Rome and start discovering this ancient and enchanting city and the main attractions of Ancient Rome
Once in Rome, join one of our Virtual Tour of Rome, a real journey through time to explore the city and live it like the Ancient Romans! You'll take part in a walking tour of about 40 minutes (with audioguide and Oculus VR), around the Circus Maximum, Foro Boario and Marcello Theatre and thanks to our Virtual Reality Glasses you'll enjoy the reconstruction of monuments and scenes of everyday life, discovering a Rome actually disappeared! The final result will be a true time travel, a sort of cognitive and emotional short circuit, something really innovative in the new technologies applied to the cultural heritage.
Then, you will head to the Colosseum and Roman Forum where, thanks to the skip the line tickets, you'll explore on your own the ancient history of these monuments.
After lunch, reach your driver to discover the main squares of Rome, like the Spanish Steps and Trevi Fountain.
Board your transport at 3pm to be back in Civitavecchia by approximately 4:30pm.
Please note: the use for long period of Virtual Reality Glasses is not recommended to children under 8. It is totally not recommended to people with epilepsy or serious eye diseases 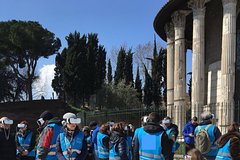 Join our
Virtual Walking Tour of Ancient Rome, a real journey through time to explore the city and live it like the Ancient Romans!
Thanks to the Virtual Reality Glasses you'll enjoy the reconstruction of monuments and scenes of everyday life, discovering a Rome actually disappeared! Escorted by our specialized staff, we'll stop along the most iconic monuments of Rome in a suggestive an evocative walk through the Ancient Rome. During the 6 stops, thanks to the multi-language audioguide and the VR Glasses, you'll admire the visual effects of
animated three-dimensional reconstructions around you at 360°, discovering how used to be the Trajan's Forum, Venice Square, Marcello Theatre, Foro Boario, Circus Maximum and Belvedere of Romolo and Remo.
The final result will be a true time travel, a cognitive and emotional journey in the cultural heritage of the Eternal City.
Not only a 3D reconstruction of monuments actually disappeared,
but real Virtual Reality emotional videos and an immersive and unforgettable experience!
Tours depart during winter (October-March) at 9.30 am, 11.30 am and 3 pm, during summer (April-September) at 9.00 am, 11.00 am, 4.00 pm and 6 pm. Please specify your preferred departure time.
Please note: tour guide is not included. You'll be escorted only by our technical staff. Cultural information will be provided by our audio-guides.

How long does Foro Boario take?

It'll take all of 20–30 minutes to visit Santa Maria in Cosmedin and its Mouth of Truth, and then to take a spin around these teensy temples here.

Also in The Aventine & Testaccio

I haven't been everywhere

“I haven’t been everywhere, but it’s on my list."
— Susan Sontag