A set from the TV series Roma

Visiting the Hollywood of Italy

From its ignominious origins in 1937 as a propoganda machine for fascist dictator Benito Mussolini, Rome's Cinecittà movie studios has grown to become a Mediterranean mini-Hollywood, the site of more than 3,000 productions from sword-and-sandals epics to spaghetti westerns, classic Fellini films to HBO miniseries.

A short, short list of some of the most famous films made at Cinecittà:

Sadly, a 2007 fire destroyed some of the modern sets (including many from the HBO series Rome—leading to many jokes in bad taste about filming the Great Fire of AD 64, the one that gave us the famous, but totally erroneous, phrase "Nero fiddled while Rome burned." Yes, the emperor was psychotic and cruel, but (a) he played the lute, and (b) was no where near Rome when the fire happened, and in fact poured his own money into the rebuiling effort).

The rest of the studios, however, remain open for guided tours, and includes a thorough "Cinecittà Shows Off" exhibition, a series of informative and interactive rooms and sections that delve into the art, science, and history of moviemaking.

Since this is a working studio, you never quite know which bits of the grounds you will get to see (sets and soundstages being used for production will be off-limits), but it's invariably fascinating.

Yes, the sets are cool but the best are the prop rooms, vast warehouses overflowing with oddments from every conceivable era and type of movie—ancient Roman statues wedged between scale model spaceships and Victorian furnishings, that sort of thing. 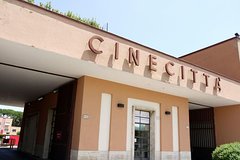 Tour of Rome's Cinecittà, Italy's Foremost Film Studio
4h | from €70
Book it
If you are passionate about cinematography and its history then explore the magic of Cinecittà through a private round-trip transfer from central Rome. Discover the symbols and the signs left by the ancient and modern movies filmed here.

Through a round-trip private transfer from the center of Rome you'll get to Cinecittà, Italy's foremost film studio founded in 1937 by Mussolini and used for many iconic Italian and international films. If you're passionate about cinematography and the history of cinema, then you can't miss this tour. You'll get to visit several impressive sets, including 1500s Florence and ancient Rome, and there are interesting exhibitions, one dedicated to the work of Fellini, and another exploring the history of the studios, with some hands-on exhibits, and, most excitingly, an American submarine set.
In the 1950s many major Hollywood films were made there, including Cleopatra. This way, Rome became nicknamed the Hollywood on the Tiber. Cinecittà also became Fellini's stomping ground and La Dolce Vita was filmed in Theatre 5, within which the director re-created Via Veneto. Later, Spaghetti Westerns dominated the schedule, as directors such as Sergio Leone directed films such as A Fistful of Dollars and The Good, the Bad and the Ugly. Recent blockbusters made here include Ben Hur and Zoolander 2. Get ready to enter the fantastic dimension of movies on this unmissable tour.

How long does Cinecittà Studio take?

If you're making the effort to come all the way out here, I am assuming you are a film buff and will want to spend at least two hours.

How to get to Cinnecittà Studio

Take Metro A to the "Cinecittà" stop.

Also in Outside the walls

I haven't been everywhere

“I haven’t been everywhere, but it’s on my list."
— Susan Sontag