In Rome
In Italy

Where to get picnic pickings in Rome

more
Shop
In Rome
In Italy 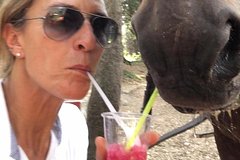 Picnic on horseback in Rome
6h | from €99
Book it
Horse riding trail in the Natural Reserve, near the beach of Rome, with delicious  pic nic organic lunch.
Trek & Tasting on horseback!
OUR HORSES, YOUR TOUR GUIDES! :)

Horse riding trail with federal guide in the Park of the Litoral with lunch in the pinewood, for expert and beginner riders.
You'll taste the tipical savour of the italian gastronomy, during your horse riding experience in the wild countryside of Rome.
We start the activity at the ranch for meet & groom the horses, during the trail you'll learn the basis of the equestrian school or refine the tecnique, with well trained and docile horses. Than we have a delicious meal in the forest and we finish the tour with a coffe' in the Park adventure where you can do many other sports like archery, climbing, lasergun battle,..
After the ride, it is also possible arrange archaeological walking tour in the Ancient Ostia area,
beach rides and entrance in the SPA with dinner included, car with driver from the hotel and ranch vacation. 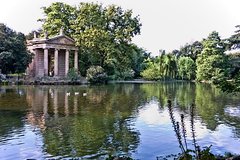 Villa Borghese Tour and Picnic
5h | from €100
Book it
Discover Villa Borghese, one of the fascinating gardens in Rome and enjoy your lunch in a wonderful place.

Relax in one of the largest gardens in Rome, Villa Borghese (the third largest public garden in Rome), with its pond, statues, the Pincio terrace overlooking Piazza del Popolo where you can enjoy one of the most beautiful panoramas in the capital. Within the 80 hectares is the Galleria Borghese, one of the most important museums, the Bioparco, Museo Bilotti, Museo Canonica, the Museo Civico di Zoologia, the Casa del Cinema and the Silvano Toti Globe Theater. Villa Borghese with its cultural richness but also a landscape with an exterminated flora and fauna, is perfect for a picnic, perhaps joining the walk and lunch in the open air. After discovering the gardens of Villa Borghese and before starting the picnic in a plaid blanket provided by us, you can even admire the Terrazza del Pincio, another symbol of the Eternal City and famous all over the world. From this place, surrounded by greenery and gardens, you can enjoy a superb view over the city of Rome which will leave you speechless. This place encompasses romance, history and beauty and the emotions that will remain with you for a long time. 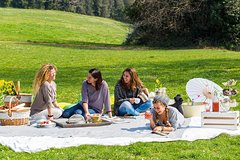 Barefoot in the Park: Your Ultimate Organic Picnic in Rome
2h | from €25
Book it
There is nothing more refreshing, informal and friendly than a picnic. Treat yourself as you deserve with freshly prepared organic, gourmet food. Your hampers will be full of home made products, and complete with cutlery, glassware and napkins. Picnic is more than a simple lunch. Its an experience!

Be ready to leave the crowd of the city center with a relaxed stop in one of the villas, the amazing public gardens of Rome.
Choose a picnic for two, a family, or a group of friends. This is a great way to have lunch surrounded by nature, while savoring organic food made with fresh ingredients, prepared by a famous Roman bistro beloved by locals.
Choose your picnic destination for a casual meal or romantic surprise.
Picnic at Villa Borghese: Villa Borghese (Borghese Gardens) is the most famous and centrally located public garden of Rome. This garden hosts a number of buildings and attractions, as well as the wonderful museum Galleria Borghese (Borghese Gallery). If you're visiting the Museum, this is a great way to have a lunch before or after the tour. Meet your picnic deliverer at the entrance of Museo Borghese (Borghese Museums) at 12.30 pm, and find the perfect place to stage your picnic.
Picnic at Villa Pamphili: The Villa Doria Pamphili is a 17-century garden with what is today the largest landscaped public park in Rome. It is located in the quarter of Monteverde, on the Gianicolo hill (Janiculum) on top of Trastevere. It began as a hunting resort for the Pamphili family. When the line died out in the 18th century, it passed to Prince Giovanni Andrea IV Doria, from which time it has been known as the Villa Doria Pamphili. This park is beloved by local people, and is perfect for dog owners and families. Make your way to the Bistrot to collect your basket picnic with towel and delicious organic food inside. At the end, return the basket. You can choose several times for this option, according to your holiday schedule. 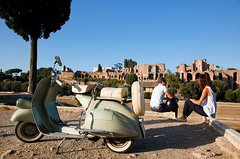 Vintage Vespa Tour with Gourmet Picnic Experience at Villa Borghese
2h 30m | from €135
Book it
Climb aboard a vintage Vespa for an insider's glimpse of the 'Eternal City' with this one and a half hour tour. A local guide will be in charge of the driving while you hold on for the ride through the ancient city gates and along the Tiber River. During the trip, the driver's commentary will include some local history and tips on where to find Rome's best gelato and espresso. The journey ends at Villa Borghese with time to explore the gardens and includes an organic picnic complete with prosecco.

This two-wheel trip through the 'Eternal City' begins at the tour office in central Rome at 11am where you will meet your guide. No training is needed to hop on the back of a vintage Vespa; the guide will do all the driving.
In the hands of a local, you will zip past traffic, through the ancient city gates and along the Aurelian Walls and Tiber River. After admiring views of the Colosseum and the ruins of ancient Rome, you will head off the beaten path to streets and alleys beloved by Romans. You will have the chance to drink from a famous Roman fountain, visit the Aventine Hill and its Orange Garden, and peer through the city's famous keyhole. Your guide will point out local attractions, including the remains of Roman aqueducts and baths. This scenic tour travels at no more than 30 km/h and the driver's commentary ranges from local history to the inside scoop on where to find Rome's best espresso and gelato.
The one and a half hour ride wraps up at Villa Borghese for an organic picnic (prepared by a local bistro) with prosecco. Explore the gardens, eat, relax, and then return to your hotel on your own. 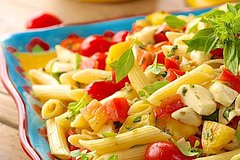 Lunch Box 100 per 100 local handmade where you want on demand
1 hour 30m | from €35
Book it
Your box lunch is the new discovery of this season! Do you want to try a local lunch delivered directly to your hotel or to any address you want?
Book the lunch box and you can taste a fantastic 100% local lunch as prepared at home by a real Italian chef!

The lunch box is ideal for a picnic entirely based on Italian food at Villa Borghese. 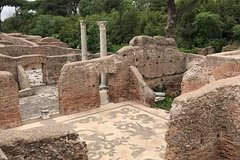 Walking tour through the fascinating ruins of ancient Ostia
2h | from €48
Book it
Interesting guided tour among the remains of the first roman colony, Ostia, founded in the 7th Century B.C.
This fascinating walk goes through an arcaeological park in the shade of secular pine trees and green landscapes.

This 2-hours walking tour leads you to discover a perfectly preserved ancient Roman city, just a few steps from the capital.
The route allows you to know customs and traditions of the ancient Romans, thanks to the information provided by the archaeological remains. Walking along the main street, the Via Ostiensis, we get to the East gate of the ancient Roman colony founded according to historians by king Ancus Martius in 616 B.C. Before entering the gate called Porta Romana youll see the cemetery outside the settlement. The tombs allow you to deepen the knowledge of the funerary rituals between the Republican and Imperial period.
Once inside the defensive walls of the city you walk along the main street called Decumanus Maximus, flanked by shops (tabernae in Latin); then you visit the Baths of Neptune, where the vast gym, the frigidarium and the calidarium decorated with wonderful mosaic floors are still visible. Next stop is the Theatre, built by the emperor Augustus and restored by Commodus; sitting on the original seats of the cavea youll listen to interesting stories about ancient Roman comedies.
From this time on, the walking tour heads to the Piazzale delle Corporazioni, the Forum, the Thermopolium (ancient fast food), discovering a world away in time but on many points of view very similar to the modern world.
The archaeological park is well organized, away from the hustle and traffic of the city, with a restaurant, toilets, bookshop, and a beautiful picnic area.

"A good holiday is one that is spent among people whose notions of time are vaguer than yours."
— J.B. Priestley