ReidsItaly.com Places in Italy Pompeii Plan for Pompeii Getting around Pompeii Pompeii layout

The basic layout and entrances to Pompeii

The Pompeii archaeological park takes up the western half of the city of Pompei (which, yes, has just the one "i" at the end, though it's pronounced the same).

Pompeii itself now has three entrances:

There's also an exit in the park's NW corner near the famous Villa dei Misteri—a frescoed villa which is a bit removed from the rest of the park, but well worth the walk. Sadly, this is an exit only; you cannot reenter the park from here—however it it close to a few good inexpensive lodgings and therefore handy if you are staying in one. 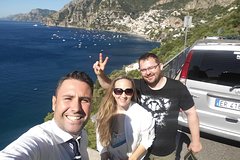 Transfer from Naples to Positano with stop on the way in Pompeii 2h
4–5h | from €45
Book it
It will be possible to visit one of the most important archaeological sites in the world with a simple 2-hour stop in Pompeii, the distance from Naples airport / station is about 20min. The Archeologicodi Pompei site is in transit for those who will be in Positano and this type of transfer becomes a great opportunity to visit it before being welcomed by the colors of the sea and the sun of Positano

In 79 AD, waves of volcanic runoff and ash one of Rome's most active and splendid cities. The speed and magnitude of the event left the city frozen in time, preserved as it was. Today, excavations of the ancient metropolis have provided some insight into Roman civilization, providing outstanding insight into the art, customs, trades and everyday. Walking the city reveals a wealth of architectural styles - since Pompeii did not segregate its neighborhoods based on income, apartments are next to lavish villas. The city's best-preserved home is the House of the Vetti, where a pool is surrounded by a formal garden. The city is an abundance of water, with an aqueduct-fed reservoir supplying public fountains, and even a street-cleaning system.

Also in Getting around Pompeii:

It's not down in any map

“It is not down in any map; true places never are.”
— Herman Melville