ReidsItaly.com Places in Italy Perugia Plan for Perugia Getting to Perugia Train to Perugia

Coming from Rome, there are five direct trains (2.5 hr) and about eight more requiring a transfer at either Foligno or Terontola.

From Florence, seven trains go directly to Perugia, or you can take one of the dozen daily trains to Terontola/Cortona that meet up with a connecting train to Perugia (2–2.5 hr total).

From Assisi, there are some 24 trains daily direct (20 min).

These lines are part of the FS state-run rail system and stop at the Fontiveggie Station on Piazza Vittorio Veneto, a 7-minute ride on Perugia's "Minimetro" (Minimetrospa.it) from the city-center Pincetto stop (€1.50 ($2)). It runs 7am–9pm (9am–8:45pm Sundays).

Perugia also sits on a privately run train line train line serving Umbria. Sixteen daily trains run north from Terni through Todi (35–45 min) and Deruta, pulling into the outlying Ponte San Giovanni Station, then chugging 8 minutes up a capillary line to the Santa Anna Station in town (tel. 075-963-7637), under the curve of Viale Roma under the Piazza Italia end of town. All outgoing trains depart first from the Santa Anna Station. (There's another line connecting Perugia with Città di Castello with a bus connection on to Sansepolcro). 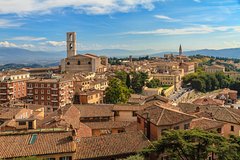 After your pick up in Florence, you will first reach Perugia, the marvelous top-hill city surrounded by ancient Etruscan walls, famous for its beautiful historic center but also for its savory chocolate.
You will discover the ancient city of Perugia, one of the popular Italian towns of art with its variety and quality of historical and medieval testimonies. It has an Etruscan origin, preserved in the travertine walls and in the well located in the village center, including the Etruscan Arch monumental city gate and Porta Marzia, ancient Etruscan gate, leading to the city from the south side. Admire the beautiful square in which you can find real architectural jewels like the superb Palazzo dei Priori (1293-1443). the main civic building, a nice and imposing Palace, with its pink gothic style windows and ornate portal, the splendid Cathedral (1345), and one of the masterpieces of sculpture with an invaluable artistic value (13th century), the elegant Fontana Maggiore (1275). This Fountain, a true symbol of the city, was created at the end of the 13th century to provide a water output to the medieval aqueduct. Finally you will be impressed by the Rocca Paolina, a fortress built up at the command of Pope Paul III; it covers an attractive underground itinerary through a distinctive medieval district, where the noble mansions of Perugias lords once were.

Then enjoy the drive to Assisi, a small town of immense beauty and spiritual significance, where the patron saint of Italy, Saint Francis of Assisi (1181- 1226) lived, worked and died. On a lowland at the foot of Mount Subasio, the hill on which Assisi rises you can visit the Basilica of Santa Maria degli Angeli, built around as a protection of the famous little church of the "Porziuncola", where Saint Francis acknowledged his vocation and founded the Order of the Minor Friars. In this place, even Santa Chiara began her monastic life. Here you can also see the "rosebush without thorns", which continues to grow only in this magic place and that, according to a legend, originated from the contact of the Saint with a thorny bush. Breathe the special atmosphere of serenity and joy that this city emanates and you will understand why the delegates of the main religions in the world have chosen it as symbol of Peace
You will have the chance to admire its remarkable beauties, such as the Piazza del Comune, the Rocca Maggiore and the famous Basilica of St Francis with frescoes and paintings by Pietro Lorenzetti, Simone Martini and Giotto.
After this visit, you will comfortably proceed with your transfer to your final destination in Rome. 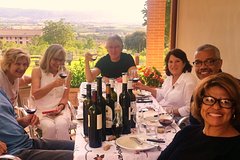 Winemaker for a Day: Tour an Organic Winery
2h | from €18
Book it
Get ready for an amazing tour in the world of organic wine: you will visit one of the oldest organic winery together with a member of the Tili Family who will explain all the process to make a fantastic organic wine. Afterwards, you can taste all the farm products during a guided tasting where you will try 5 different organic wines of Assisi DOC and Umbria IGT. The wines will be paired with warm bruschette with organic extra virgin olive oil, a selection of cheeses and salami with jams, and local biscotti with sweet wine. At the end you will receive a certification of Apprentice Winemaker!
We offer pick up on request for a fixed price the pick up from the city center of Assisi or Spello or the Assisi train station. 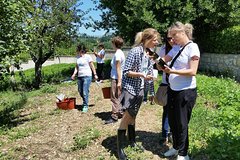 Treasure Hunt & Wine Tasting
3–4h | from €35
Book it
Come all to enjoy the most funny tresure hunt in the vineyards!
After a quick tour of the winery, youll have a walk all over the farm looking for bottles with clues that will lead you to the craved prize. At the end of the hunt everybody will participate at the Victory Party with our organic wines paired to typical and local food.
We offer pick up on request for a fixed rate from the city center of Assisi or Spello or the Assisi Train station or local hotels. Please contact us to request the pick up.

There was nowhere to go but everywhere

“There was nowhere to go but everywhere, so just keep on rolling under the stars.”
— Jack Kerouac