ReidsItaly.com Places in Italy Perugia Plan for Perugia Getting to Perugia Bus to Perugia

Taking a public bus to Perugia

The bus depot in Perugia is on Piazza Partigiani, an escalator ride below Piazza Italia. The stand there sells tickets for all lines. 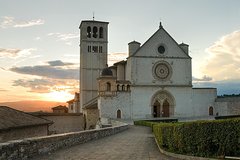 The building is characterized by the execution of the whole body with pink and white bands of Subasio stone and majestic climbing arches supporting the two sides of the church. The interior is structured like the upper Church of St. Francis with a single nave ending in a transept with a polygonal apse. Here too a gallery goes around the perimeter, however, contrary to St. Francis, at the height of the capitals of the pillars.

The Basilica of St. Mary of the Angels is a church, of Roman Catholic rite, located in Assisi, in the hamlet of the same name. It was built on a project by Galeazzo Alessi and with interventions by Jacopo Barozzi da Vignola starting from the second half of the sixteenth century.

“Once a year, go somewhere you’ve never been before.”
— The Dalai Lama