ReidsItaly.com Places in Italy Perugia Plan for Perugia Getting to Perugia

How to get to Perugia, Italy, by train, car, or bus

Taking a public bus to Perugia

How to drive to Perugia

Getting to Perugia by escorted tour 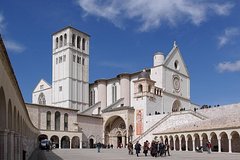 Private Tour: Assisi Day Trip from Rome
9h | from €84
Book it
Swap the big city bustle for medieval small-town charms on this private day trip from Rome to Assisi. In the company of your very own  knowledgeable English-speaking driver, travel through the Umbrian hills to the UNESCO World Heritage-listed town of Assisi. See the Church of Santa Chiara, the birthplace and childhood home of St Francis of Assisi, as well as the town hall square and the Roman Temple of Minerva. After lunch (own expense), visit the Basilica of Santa Maria degli Angeli.

During this Day tour excursion from Rome you will have the chance to travel to real Italy, far away from the modern highways and large cities, in the heart of the Umbrian countryside, where small ancient villages are waiting to be discovered. One of them is Assisi, an oasis of art, architecture and spirituality and the home of Saint Francis, one of Italy's most beloved saints.

.Leaving Rome in a northerly direction, you will cross the valley of the Tevere, passing by typical medieval villages such as Deruta, Todi e Perugia before arriving in Assisi. Here you will start your walk through the narrow streets of the village to see the church of Santa Chiara, containing the remains of Saint Clare, a follower of Saint Francis and founder of the Order of Poor Ladies, and then on to see the house where St. Francis was born and spent the first years of his life.

All roads will take you to the Basilica of San Francesco. This grandiose and gorgeously embellished Basilica is a rather incongruous memorial to a man who preached and lived a simple life of poverty, abstinence, and renunciation of worldly goods in search of greater spirituality.
It is however, one of the world's most wonderful encounters between religion and art. Unique paintings by Cimabue, Pietro Lorenzetti, Simone Martini and Giotto, have made the Basilica of St. Francis a fundamental reference point for the development of Italian and European art and architecture.

Basilica of Santa Maria degli Angeli where you can see the Porziuncola Chapel, the place from where the Franciscan movement started, and the site where St. Francis died in 1226. Driving back to your hotel, revel in the memory of the day coming to its end. 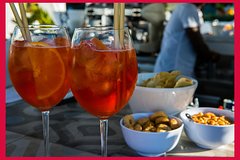 The art of the Italian Aperitivo with a Cesarina: Learn & Enjoy in Perugia
2h | from €105
Book it
Your day in Perugia is just winding down, the sun's about to set... It's time for an Aperitivo. This glamorous Italian tradition is loved all over the world, and this is your chance to learn how to prepare it for yourself, the perfect souvenir.
Preparing the perfect aperitivo is an art; you will learn how to prepare a selection of
five elegant nibbles to pair with with a
refreshing glass of fizz, ideal for sharing with friends in the early evening. Your aperitivo will be a
bite-size representation of its local culture, using typical regional ingredients and local wines, such as a sparkling prosecco or a light red.

Le Cesarine is Italy's first national network of certified home cooks, who strive to safeguard and promote Italy's real culinary heritage.
• Cultivate relationships with local people: experience a truly Italian welcome in local peoples' home, as you enjoy an evening together like part of the family.
• Prepare an authentic selection of five nibbles with traditional local ingredients. Delight your palate with some truly delicious tastes of the local cuisine. Whether it's a bruschetta drizzled with fragrant olive oil, freshly grilled market vegetables, or a selection of the area's finest charcuterie and cheeses, it's the best way to taste and understand a whole range of local produce.
• Live the Italian way of life in a real local home. Whether you're unwinding after a long day, or just getting your night started.
• Enjoy a selection of wines from regional cellars and drinks: our Cesarine offer only wines of the territory. 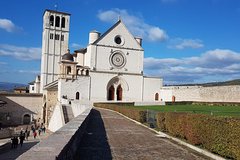 Private Tour: Assisi and Orvieto Day Trip from Rome
12h | from €198
Book it
Spend a day in Assisi and Orvieto with your own private guide, and follow in the footsteps of St. Francis of Assisi, Italys patron saint. On a walking tour, youll explore the UNESCO World Heritagelisted town and visit the Basilica of St. Francis of Assisi and the Basilica of Santa Maria degli Angeli. After a break for lunch, head to Orvieto to admire its striking Gothic cathedral.

In the early evening, return to your transport for the journey back to Rome. Your day trip ends with a drop-off at your hotel.

travel to your second hilltop village of the day: Orvieto. Head up to the Old Town to admire the colorful Gothic façade of Orvieto Duomo, and take a look inside.

The most famous of Assisis hilltop villages is Assisi, a beautiful walled town thats known as the birthplace of St. Francis. Hop out to discover its narrow streets, flower-decked balconies, and noble palaces, and learn about the saints connection to the town. Visit St. Francis Basilica, home to early Renaissance art by Giotto and Cimabue, and step inside the Basilica of Santa Maria degli Angeli.

So many Brits (and other ex-pats) have lived or vacationed in the Chianti, by the 1970s it had acquired the nickname "Chiantishire." British PM Tony Blair famously vacationed here repeatedly in the 1990s, and such celebrities as Sting, Antonio Banderas, Bryan Ferry, and Richard Gere have owned homes here.