One of the city's most romantic spots is this ruined 12th-century church and monastery complex on the Albergheria's western edge, built under the reign of Roger II between 1130 and 1148.

The simple church with its five unmistakable Arabo-Norman (a.k.a. Arabian-Fatimite) red domes is set amid luxuriant gardens of palm, Indian fig cacti, jasmine, oranges, and pomegranate.

Little paths wind among the greenery and lead to the broken, evocative remains of 13C cloisters and into a small rectangular building from the 10th century that was once a mosque. 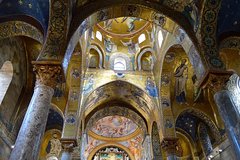 HALD DAY WALKING TOUR PALERMO COMBINING ART AND FOOD
3–4h | from €170
Book it
UNESCO PALERMO : this 4hours walking tour includes the visit inside the Royal Norman  Palace (12 century) to admire the  Palatina Chapel and its Byzantine mosaics ,
the main monument to represent the wealth and political and cultural power of the Norman kingdom.
San  Giovanni Eremiti church
which show the persistence of Arab influences in Sicily (outside)
Walking tour in the old city to admire the Cathedral, Quattro Canti and Fountain Pretoria, Bellini square  (Martorana and San Cataldo churches)  Proceeding to the historical market Ballarò we stop  to
experience
the street food ( arancine, panelle, sfincione, milza etc..) as you learn abut Sicilian
gastronomy,
recipes, sweets and wines, the  perception of
its intensity can be altered by smell and  tasting :Sicily is  a land with an extraordinary
food tradition.

ITINERARY: 4 hours  walking tour Royal Palace and Cappella Palatina The mosaics of the Palatine Chapel are of unparalleled elegance. They are also noted for subtle modulations of colour and luminance.The chapel combines harmoniously a variety of styles. Other remarkable features of the chapel include the muqarnas ceiling which is spectacular.
Palermo Cathedral, Church San Giovanni degli Eremiti .The church is notable for its  red domes, which show clearly the persistence of Arab influences in Sicily at the time of its reconstruction in the 12th century, the Arab-Norman culture.
Walking tour through Palermo old town across old streets until the Quattro Canti, Pretoria and  Bellini square for a foto-stop (Martorana and San Cataldo churches) Street food at one of the oldest open market of Palermo.
WHAT IS INCLUDED : Guided tour
Whats Extra:  admission fees at the Royal Palace and street food .Transportation. 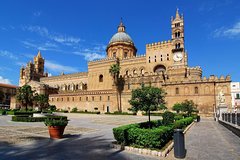 Through this 3-hour walking tour you will have the chance to visit, with a private guide, the beautiful city of Palermo from a fascinating historical perspective. You will follow the footsteps of the Norman kings who lived and reigned here during the 11th century.
In particular, your guide will take you inside the Cathedral of Palermo to visit the crypt and the treasure room. You'll then walk to the Cassaro alto and to Piazza della Vittoria, where you can still see some of the mosaics of the Roman villa.
Your guide will then show you San Giovanni degli Eremiti (from the outside) and after that you'll have the chance to enjoy a visit inside the Royal Palace and the Palatine Chapel, the political and cultural center of the Norman kingdom in Palermo.
FYI: please note that for the Cathedral (€5) and the Royal Palace (€8.50) you need to buy the tickets on the spot. The other attractions can be visited for free.

Plan to spend about 30–40 minutes here. It is a lovely spot to sit and relax, maybe make a sketch or two.

Palermo has a variety of cumulative tickets:

Palazzo Abatellis plus your choice of ONE of the following:

Palazzo Abatellis plus ALL of the following: