ReidsItaly.com Places in Italy Paestum Plan for Paestum Getting to Paestum Train to Paestum

Last I checked, the ticket office at Paestum's tiny rail station was closed indefinitely; if this is still the case, you can still get on here and then pay the conductor on the train with no penalty. (Oh, and the Paestum train station sometimes goes by the confusingly long name "Capaccio Scalo/Roccadaspide – Paestum." This is not to be confused with the station/stop just to its north on the same rteail line, which is called just "Capaccio Scalo/Roccadaspide." Yeah. Italy.) 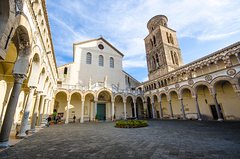 Salerno City & the Greek temples of Paestum
7h 30m | from €121
Book it
Embark on a tour of the city of Salerno, thought to be one of the most beautiful town in Italy,
strolling through the medieval quarter to its remarkable 11th-century cathedral, and then visit the town of Paestum, one of the archeological pearls of Italy.
Enjoy a full day with transporation in a modern and comfortable Minivan and let yourself be guided by a local professional guide.
Discover the historic center of Salerno in a 2 hours walking tour.
After exploring Salerno, you will go to discover the beautiful ancient city of Paestum, one of the main centers of the ancient Magna Greece and one of the precious archeological pearl of Italy.

Pick up at train's station, port of Salerno, or any accommodation in Salerno, Amalfi Coast or Naples.
Arrival at Salerno and start in a 2 hours walking tour.

The city's heart, a beautiful medieval quarter, offers a perfect setting for a walking tour, which takes you through its narrow, shop-filled streets, following the medieval urban plan to hit upon some of the stunning historical buildings and religious architecture the city is known for, including the spectacular 11th-century Cattedrale di Salerno, a masterpiece of Norman architecture.
In the afternoon spend some time exploring its ancient ruins, including the three ancient Greek temples preserved in the city, and then return to your couch to begin your journey home.

Walking in the center and heart of the city.

Trasfer to Paestum and explor with an archeologist the magnificent greek temples of Paestum.

Temple of Hera II in Paestum (Poseidonia), earlier and still often known as Temple of Poseidon or Temple of Neptunus due to misidentification. This is the more northern and younger of the two temples of Hera in Paestum.

Founded in the Caesarean period (around 50 BC), it is one of the oldest examples of this kind of buildings.

The Temple of Athena or Temple of Ceres (c. 500 BC) is a Greek temple found at Paestum, built near the so-called Basilica which is much larger than it.

Lunch break in a typical restaurant and transfer to the archaeological site of the nearby Paestum, where you can admire the magnificent ancient ruins conserved in the National archaeological museum of Paestum.
Drop off at train's station, port of Salerno, or any accommodation in Salerno, Amalfi Coast or Naples.

Also in Getting to Paestum:

Also in Getting to Paestum:

There was nowhere to go but everywhere

“There was nowhere to go but everywhere, so just keep on rolling under the stars.”
— Jack Kerouac