Presepio figurines in a shop on Via San Gregorio Armeno

The street of Via San Gregorio Armeno outside the church of that name is lined with artisan shops where craftsmen labor away at the figurines used in Naples' traditional presepi, or Christmas crèches.

These dioramas of the Nativity, which probably date back to St. Francis of Assisi in the 13th century but became most wildly popular here in Naples starting in the 17th century, are still an integral and important part of the Christmas season, assembled in church chapels and on piazze throughout Italy starting in November.

Presepi seem to concentrate more on finely studied figures of peasants and townsfolk than the Holy Family itself. Especially here in Naples, the backdrop is often a suspiciously Italian-looking Bethlehem, complete with Neapolitan pizzerie, workshops, all sorts of food shops (vittles are vital to any proper Neapolitan presepio), and the inns where locals carouse, occasionally joined by contemporary political figures.

The Nativity itself is stuck off in an unobtrusive corner building, which often manages to incorporate a crumbling ruin of a Roman archway so you know it's ancient Bethlehem.

Photo gallery
Naples tours
Neapolitan Christmas Traditions
3 hr | from €347
Book it
Neapolitans have always considered Christmas the most important holiday of the year. A variety of culinary and artistic traditions come together to transform the city during the weeks leading up to and after Christmas into a sensual delight. This special Naples Christmas Tour, organized by some of our native Neapolitan docents, takes us into the heart of the Neapolitan Christmas to savor the sights, smells, and sounds of one of the most fascinating holiday cities in the world. Naples Christmas Tour We begin at the church of San Domenico Maggiore, a great example of Neapolitan Gothic and Renaissance art, and then move on to the Chapel of Sansevero, where we'll discuss Giuseppe Sammartino's Veiled Christ, an incredible example of artistic and religious expression transcending the physicality of marble. Local Crafts After this aperitivo of high art, we'll dive into the lively streets of Naples where local handicrafts—specifically the production of crèche, a paper mache-like material—are on display. Nativity scenes, or presepe, dominate, and we will explore the different use of material, from wood to terracotta and marble, in a religious and artistic context. Our docent will lead us through the streets where small figurines are sold and made, stopping at one artisan's workshop. Here we'll hear about the special and intricate technique of crèche making. Ending at an Enoteca The walk will end at a small enoteca, or wine bar, where we'll taste some Christmas specialties like taralli, casatiello, sfogliatelle, and babà al limoncello and, of course, have a glass or two of Christmas cheer.
Partner 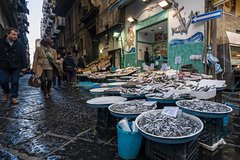 Food Tour in Naples with Limoncello and Sfogliatella Tastings
3h | from €79
Book it
Partake in this 4-hour food tour from Naples where you will taste delights such as limoncello and sfogliatella. Walk the streets with your small-group tour of no more than 8, viewing culturally-rich squares as you go. Stroll through history, capturing photographs of the Greek and Roman influences as the day passes by.

After meeting your guide, start your tour with a tasting of a traditional Neapolitan coffee. Then, enter the historical city center through one of the medieval gates. Come through the Greek-Roman area and walk along the walls that surrounded the town centuries ago.
Travel though Piazza Vincenzo Bellini, a small square, which is a meeting point for artists, musicians, and students. Next, you will reach Spaccanapoli, the old Roman street 'Decumano' which crosses the town from the highest point in the Vomero hill to Piazza Garibaldi. Walking along this road, you will touch the heart of the city with its ancient and beautiful churches.
As you walk the road, you will come across a vendor who will provide you with a taste of limoncello, the typical liquor made with local lemons that grow around Naples. Proceed to one of the most important squares in the historical city center, Piazza San Domenico. Here, you will take a break to taste the delicious 'sfogliatella' in one of the oldest bakeries in the area, 'Scaturchio.'
Afterwards, wander over to San Gregorio Armeno, the alley where the busiest exposition of the 'presepio' is located. Next, head to the middle of the town where you will taste authentic pizza and local red wine, Aglianico. 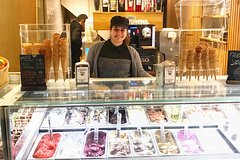 Ancient Naples and Decumani Evening Food & Wine Tour with Local Guide
4h | from €85
Book it
Do not miss the chance to try the best specialties from one of the most rich Italian cuisine. Do not miss out on feasting on pasta with potatoes, parmigiana and fried pizza, the iconic traditional Italian dishes made by the local like no one else. On this 4-hours food and wine tour you will taste the best local specialties all while you discover the highlights of the historic centre considered one of UNESCO World Heritage. Visiting Naples's historic center means traveling through twenty centuries of history.

The meeting point for the Food Tour is Piazza Bellini, right by the statue of the great musician Vincenzo Bellini and the "greek walls". Your guide will tell you about the historical origin of Naples and its archeological and artistic treasures. Here you will also pass by The Conservatory of San Pietro a Maiella, one of the oldest and most famous in Italy.

San Gregorio Armeno is the name of a narrow street, which is world famous for the handicraft of "Presepi" (nativity scenes). The "crèche" has a long tradition in Naples, since the beginning of the 18th century or even before, and still at the present time the local families of artisans, we should better call great artists, are famous all over. Not far is also the gateway to "Napoli Sotterranea", the underground itinerary through the magic spaces of the Roman aqueduct, transformed into anti-aircraft shelters during World War II. The walk proceeds along "Spaccanapoli", one of the main streets in the ancient times (the name means "splitting
Naples"). On the way you will stop to taste the famous "cuoppo" (a fantastic fried fish mix served in a paper cone) and limoncello liqueur.

Stop At: Via dei Tribunali, Naples, Province of Naples, Campania

Pass by Via dei Tribunali, which was the main street in the ancient times (greek and roman time). During the beautiful promenade you will stop at a typical "boulangerie" to taste tarallo (local rustic cookie), mozzarella cheese, salami and good wine; and then the traditional Neapolitan specialty the fried pizza and "wallet pizza". As you stroll around the old city center, we will stop for a rich dinner in a local osteria to enjoy typical local dishes, such as parmigiana di melanzane (eggplant parmesan), friarielli (rapini vegetables), pasta e patate with provola cheese, ragù sauce all paired with local wine.

The tour continues at Piazza del Gesù, where your guide will show you some of the beautiful churches (outside) in Naples old centre, Santa Chiara and Gesù Nuovo.

Here comes the nice and relaxing walk in Via Toledo, the main street, full of amazing shops and historical palaces. Upstream of it an unbelievable maze of narrow streets: it's the "spanish area", where, just in the long period of spanish domination, most of the administrative buildings and barracks were located. Finally, the majestic Galleria dedicated to the second italian king Umberto I, which is the most popular meeting place in the city centre,and San Carlo Opera House(1737), the oldest european theatre still in operation.

Here we rich the gorgeous Piazza del Plebiscito, the most famous square in Naples. On one side of it is the Royal Palace (1602); on the other side the neoclassical Church of S. Francesco di Paola (1816) and the statues of the two most important spanish kings (bourbon dinasty), Charles and Ferdinand. In the corner Caffè Gambrinus, the oldest and best-known cafeteria in the city, where you are going to stop and taste some of the most typical local sweets, such as "sfogliatella" and "babà", the world famous local gelato and neapolitan coffee. Here also starts the "fashion promenade" in Via Chiaia, with all the elegant and exclusive boutiques. In the same street is located the Pizzeria Brandi, where in 1889 the pizza Margherita was invented. 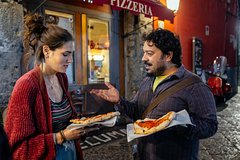 A Taste of Naples: Food, History & Culture Private Tour
2h | from €20
Book it
Looking for a tour that gives you the best of Naples? Look no further! On this unique experience, you can enjoy Naples with a bit of history, culture, and food. The best part? Its private, with a local host by your side and it even comes with a UNESCO protected pizza!

What better way to discover a city than through its culture, food, and history, and lucky you, this private tour has it all! Enjoy Naples, together with a local host, with a touch of myths and legends, symbols, delicious pastries, prosecco, and city highlights. This is the best way to enjoy Naples to the max!
Say ciao! to the famous Dante at the historical centre. Here, a statue of the inventor of the Italian language welcomes you to the city. Ready to start discovering beautiful Naples? Follow your local insider through small alleyways that lead to a beautiful piazza. How about a bubbly refreshment? Clink your prosecco with your local host and saluti!
Sip and enjoy it while admiring incredible underground ruins from the city's 4th-century Greek city walls. Another cool symbol of the city that youll encounter along the way is the Pulcinella mask. Hear about its story plus other legends and myths Neapolitans believe on.
Did you know that Naples used to be a Greek colony? Around the city, there are still symbols and details that showcase the remains of this culture. Your local host will point out the similarities hidden in plain sight between the Greeks and Naples as you stroll along.
Can you believe that the best pizza in town is protected by the UNESCO? Si! This pizza is a treat from Italian heaven, and youll have a chance to try it! Grab your folding pizza, and eat it on the piazza like a local.
If theres one thing that characterises Naples it is its all-year-round Nativity crafts. Keep wandering and enter a Christmas paradise where youll see how big this tradition is at the presepio street. More treats are waiting! Go to one of the oldest pastry shop in town and pick from a classic ministeriale, a tasty sfogliatella, and a mini babà filled with rum. Still feeling peckish for more treats? Try all the pastries you want on a personalised offer!
The local hosts are natural storytellers, each one with a different background ranging from the arts to history.
This is the plan:
Meeting point: Ciao Dante!
Stop 1: Prosecco on the go
Stop 2: Hidden Mask
Stop 3: Nativity Street
Stop 4: Spaccanapoli Stroll
Stop 5: Coffee and Pastris
Stop 6: Historic Monastery
End of the tour with suggestions of where to go next from your local host!