From this 4C church, St. Ambrose—bishop of Milan when the city was briefly capital of the Western Roman Empire—had a profound effect on the development of the early church

From the basilica that he constructed on this site in the 4th century—when he was bishop of Milan and the city, in turn, was briefly capital of the Western Roman Empire—Saint Ambrose had a profound effect on the development of the early church.

It has a striking atrium, lined with columned porticos and opening on the side to the brick facade, with two ranks of loggias and, on either side, a bell tower. Look carefully at the door on the left, where you'll see a relief of Saint Ambrose.

Note the overall effect of this architectural assemblage, because the church of Sant'Ambrogio set a standard for Lombard Romanesque architecture that you'll see imitated many times on your travels through Lombardy.

On your wanderings through the three-aisled nave, its round arches neatly outlined in brickwork, you'll come upon a gold altar from Charlemagne's days in Milan, and, in the right aisle, the all-too-scant remains of a Tiepolo fresco cycle, most of it blown into oblivion by World War II bombs.

The 11–12C pulpit of Sant'Ambrogio features embossed and gilded copper reliefs (possibly from Germany) of the symbols of evangelists John and Matthew. The pulpit squats over the gorgeously carved 4C so-called Sacophagus of Flavius Stilicho (though there is little chance that the famous half-Vandal Roman general, who was killed in Ravenna, is actually in there).

The little that remains of the original church is the Sacello di San Vittore in Ciel d'Oro, a little chapel in which the cupola glows with 5C mosaics of saints (enter from the right aisle).

The 4–8C mosaics in the apse of Christ the Redeemer between Sts. Gervasio and Protasio were restored in the 18C.

The skeletal remains of Ambrose himself (along with local martyrs Saints Gervase and Protase) are on view in the crypt.

One of the "later" additions as you leave the main church from the left aisle is another work of the great architect Bramante—his Portico dell Canonica, lined with elegant columns, some of which are sculpted to resemble tree trunks. 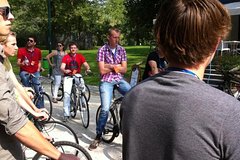 Meet-up with your guide in the morning or afternoon and take off on a group cycling tour of the most evocative and interesting places of art and history in the center of Milan. Cycle to the outside of the Sforza Castle monument, visit its inner courtyards, and get an explanation of its art and history.
After, get some outside views of the Peace Arch, the Santa Maria delle Grazie and The Darsena and Canals and take a few photos with your camera.
Afterward, hop back on your bikes and head to San Lorenzo and the roman columns, the Basilica di Sant'Ambrogio, the Roman ruins via Brisa, the Piazza Affari and Maurizio Cattelan Contemporary art installation L.O.V.E, where you'll have another short stop for photos.
Then, head to Mercanti Square, La Scala Square, Galleria Vittorio Emanuele and finally, Duomo Square for another short photo session before heading back to the starting point of the tour. 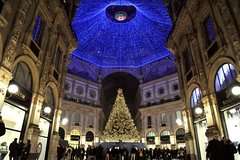 Watch Milans night-life scene come alive on this 2-hour sightseeing walking tour.
Kick off the evening with an aperitif and then see Milans beautiful squares and monuments lit up at night on a guided tour through the city center. See and learn about top Milan attractions including Porta Venezia, Corso Venezia, Piazza del Duomo, La Scala, Sforza Castle and Basilica di Sant'Ambrogio.
Accompanied by the lights of the evening we will spend together a couple of hours around Milan, to therediscovery of the many small and large treasures that during the day we use to ignore.
At each "By Night" appointment we will deal with a zone or a district always different, this time we will discover the history of Piazza San Babila recounting its origins and history, seasoned with curiosity related to particulars too often ignored, but we will not stop here. 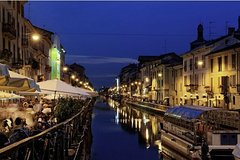 MILAN AFTER DARK: NIGHTLIFE EXPERIENCE
3h | from €103
Book it
As the sun sets and Milans vibrant nightlife districts come to life, explore the city with a like-minded local to see the landmarks magically lit up after dark and enjoy a few drinks together along the way! Milano is the home of aperitivo, so head to the Navigli district and start your evening like the locals do, enjoying a drink and a small plate of nibbles before you head off to explore the best of the citys nightlife scene! Stroll along the canal as its vibrant, nocturnal personality comes out to play, bar hop through neighbourhoods loved for their nightlife and see the citys spectacular landmarks lit up.

Kick off the evening with aperitivo at one of the vibrant bars along the Navigli Grande, enjoying the Milanese tradition of a small plate of nibbles accompanied by a drink - try the classics like Negroni or Aperol spritz! Wander through Milans piazzas and see the monuments and the impressive Duomo lit up against the night sky, and see other landmarks like  Porta Venezia, Corso Venezia, La Scala, Sforza Castle and Basilica di SantAmbrogio in a new light. Now its time to really experience Milans vibrant nightlife; head to a bar thats recommended by your local where you can enjoy another drink and soak up the dynamic atmosphere. Stroll through a neighbourhood thats famed for its eclectic and buzzing bar scene and choose another bar, perhaps on an outdoor terrace or in a bustling piazza and enjoy a final drink with your local, or perhaps head to a club or music venue to continue you night! Accompanied by the lights of the evening, discover hidden gems and lost treasures that you miss during the day and get recommendations from your local for the best places in the city to party. 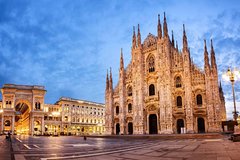 Private 4-Hour Walking City Tour of Milan with private official tour guide
4h | from €45
Book it
Milan is the second biggest city in Italy, and it is known as the financial center of Italy. The city is very well known for its cosmopolitan style.
The tour will include Milans most important and emblematic sights, which you will discover next to your private official tour guide.
In this private walking tour you will get to know some of the most representative places of Milan. Amongst other monuments and sights you can get to know:
• Milans Cathedral - entrance included
• Castle of Sforzesco
• Brera
• Gallery of Victor Manuel II
• Pinacoteca of Brera
• Santa Maria delle Grazie (with stunning frescoes)
• Basilique of San Ambrosio
• Piazza del Duomo
• Parque Sempione
• Much more!
You will be able to enjoy and admire the great architecture and sights of Milans most important and well-known monuments.
Your private official tour guide will be at your disposition during the whole tour to enjoy Milan to the fullest and to get to know the most out of your experience.

Entrances to Last Supper NOT INCLUDED