In Milan
In Italy

Milan's Brera is one of the top painting galleries in Northern Italy, with works by Raphael, Caravaggio, Tintoretto, Mantegna, Bellini, and Piero della Francesca

more
Museum
In Milan
In Italy 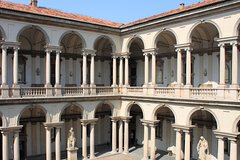 Milan Skip-the-Line Brera Art Gallery Ticket
2h | from €19
Book it
The Brera Art Gallery (Pinacoteca di Brera) is the main museum of Milan, and one of the most important in the world for its prestigious collections of ancient and modern painting, with masterpieces from the 13th to the 20th century. A large part of the collections stems from Napoleonic times, when churches and convents were required to cede their works of art to the government.

The Brera Art Gallery is located in the Brera Palace, former convent of the Humiliati order from the 1300s. Other cultural institutions are also located here, such as the Library, the Astronomic Observatory, the Botanical Garden, the Lombard Institute of Sciences and Letters, and the Fine Arts Academy.
When Milan became capital of the Kingdom of Italy, some of the most important paintings appropriated by Napoleon in Italy came to the Brera. Most of them arrived from the Veneto, from the Sampieri Gallery in Bologna, and from the Quadreria Vescovile in Milan. In 1813, following a pact with the Louvre Museum, Brera received five paintings by Rubens, Jordaens, Van Dyck, and Rembrandt, to represent the Flemish school of the 17th century.

Life is either a daring adventure

“Life is either a daring adventure or nothing at all.”
— Helen Keller