In Milan
In Italy

Planning a trip to Milan

From the Metro (subway) and the bus/tram systems to taxis, bikes, and other transportation options in Milan

The major neighborhoods, streets, squares, and landmarks of Milan

Maps to the great city of Milan

An interactive map of Milan

more
In Milan
In Italy

The interactive maps on ReidsItaly.com

Expert-Led Private Milan City Orientation
2h | from €46
Book it
Meet a local insider for coffee, chat and an informal tour of your neighborhood in Milan as a way of getting your bearings on arrival.

Milan is a vibrant city full of energy and history. It can be intimidating to know where to go, what to do, and how to find anything that's not already listed in a guidebook. In this two-hour sit-down chat and informal tour you will meet a local insider who knows Milan inside and out, what makes it different and special, and how to feel like a local while you are here. Ideal for your day of arrival, or very beginning of your trip.
We begin by meeting you at your hotel or a coffee shop near where you are staying. Your insider will show up with maps, schedules of events, and tons of know-how about using local transport, where to eat, and fun places to visit. We'll spend about an hour together discussing your trip and answering any questions about what to do while you're here.

Next, we'll hit the streets for a basic, 1-hour introduction to your neighborhood. We point out some local attractionsbig and smalland orient you to your surroundings. Depending on where you're staying and what interests you we wander farther afield and explore the city more widely.

The goal of this experience is to give you insight into the local culture and pace of life in Milan so that you'll feel a little more local while you're here. We will explain local customs (How do you buy produce in the local market? What's the correct word for that breakfast pastry glistening with sugar? What is the local drink of choice?) and share with you a bit of the area's history. During these two hours together you will have the unique opportunity to learn from your insider's expertise and love for their city. 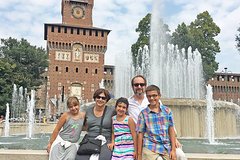 Milan Private Sightseeing Tour for Kids and Families with Local Guide
3h | from €35
Book it
This 3 hour private tour of Milan is designed specifically for children and their families. Your guide will use interactive visual learning tools, maps, games, and trivia to introduce children to the wonders of Milan. Explore Piazza Mercanti, the Duomo, the Piazza della Scala, the Sforza Castle and more.

Meet your guide in Duomo square to begin your 3 hour tour of Milan designed especially for children. Your local, English-speaking guide will use narrative games, clues and trivia to keep children interested throughout the tour.
You will visit the  the Duomo, the fifth largest cathedral in the world. Dating back to 1386, its pink marble façade and Gothic spires make it the perfect setting to hear tales of all of the mysterious passageways within.
Learn about the works and life of Leonardo da Vinci who spent much of his career in Milan and stop by the Piazza della Scala to see the monument dedicated to him. Continue on to explore the Galleria Vittorio Emanuele II shopping mall.
Visit Sforza Castle courtyards and learn about the glorious past of Visconti and Sforza families!
Throughout the tour, your guide will utilize interactive visual learning tools, iPad games and trivia to help keep children involved and entertained.

(no rating)
Milan Briefing: Coffee and Stroll with a Local Expert
2 hr | from €266
Book it
Our two-hour Welcome to Milan experience provides a great introduction to Milan and is perfect for first time visitors or repeat travelers looking to get a sense of their neighborhood while reacquainting themselves with the city at large. Want advice on exploring the city by subway, or need help with restaurant recommendations? This chat, starting with an hour in your hotel room or flat and then moving on to an hour stroll of the nearby area, is the opportunity to get the helpful advice of a seasoned local while starting your trip on the right foot. Welcome to Milan Tour Our Welcome To Milan experience normally begins in your hotel lobby, your apartment, or a nearby cafe shortly after your arrival. Our docent, an expert on Milan, will explain the organization of the city and the area where you are staying. Your docent will also give you tips on dining and shopping, as well as the insider scoop on any interesting events, concerts, or exhibitions taking place during your stay. If you have walks booked with us, we will discuss your itinerary and go over any last minute questions. Then we will open the floor to your questions about your stay. We'll be sure to bring along maps and our guidebooks to the city that will feature information germane to your particular visit. Looking for more tours for first-timers? We suggest our Milan Walking Tour or Milan Fashion Tou Exploring the Neighborhood After our meet and greet, we will spend the rest of our time together exploring the neighborhood in which you are staying, locating the best places for coffee or cocktails, any noteworthy historic or cultural sites, and getting acquainted with the closest public transportation stops and taxi stands. We'll make sure you're set up to make the absolute most out of your stay in the city while providing a historical background to your surroundings. Note: You will be asked for your hotel or apartment address and your arrival information at checkout in order that we can arrange a meeting point and time on the day you arrive. In order to help prepare our chat, please add your interests or and specific questions in the Special Requests box so we can best cater your chat.
Partner 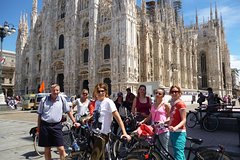 Milan Bike Tour
3h 30m | from €35
Book it
Discover the delights of Milan by bike on a morning, afternoon or evening tour! Following an expert guide, youll cycle at a gentle pace around the captivating city streets, seeing top Milan attractions as well as lesser-known treasures that tourist maps miss. Explore fashionable and quirky neighborhoods like Manzoni and Ticinese, and see iconic Milan monuments such as Milan Duomo, Teatro La Scala, Castello Sforzesco (Sforza Castle) and more!
Numbers are limited to ten on this small-group Milan bike tour, ensuring youll see the sights with personalized attention from your guide.

Meet your guide and after a short safety briefing, set out to explore Milan! Stop for photos in front of glitzy monuments and hear Milanese history from your guide. Simply choose from a morning, afternoon or evening tour.
Morning or Afternoon Tour (3.5 hours):
Pedal through the downtown streets, discovering Milans glamorous neighborhoods and their countless delights. See the lavish gardens that border the streets of Palestro, and soak up the palazzo chic of the Manzoni district, where ornate buildings showcase the worlds premier fashion houses. As you meander to Piazza della Scala, look out for Milans famous theater  Teatro La Scala.
Explore the chic streets of Brera, with its narrow church-lined streets and upmarket houses, and then admire the exterior of Castello Sforzesco in all its Renaissance glory. Hear how this impressive castle was built for the first duke of Milan in the 14th century and is now a popular museum complex.
Other highlights include the Piazza Gae Aulenti, and Colonne di San Lorenzo  Milans oldest Roman ruins. Before returning to Porto Venezia, head to the neighboring square to see Milan Duomo.
Evening Tour (3 hours):
However captivating Milan is by day, its somehow even more so by night, when the citys monuments are bathed in a soft evening glow and the glamorous Milanese sit outside enjoying their aperitivos (pre-dinner drinks). Soak up the ambiance on a route around the city center, taking in several sites seen in the morning and afternoon tours such as the Palestro neighborhood.
Admire the fountains under Castello Sforzesco lit-up ramparts and Parco Sempione, the vast park just behind Castello Sforzesco. See Ponte delle Sirenetta  a pretty bridge with cast iron statues and then continue to Colonne di San Lorenzo.
Pass further top city attractions like Milan Duomo, Piazza Mercanti and the famous Teatro La Scala, while hearing tales and trivia about the city. Finish back at Porta Venezia, and after returning your bike, your guide will point you in the right direction to get back to your hotel. 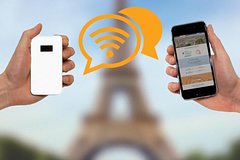 WiFi Everywhere in Milan
20 days | from €76
Book it
Enjoy unlimited internet everywhere in Italy with 4G-LTE Pocket WiFi. Stay connected anytime and avoid data roaming charges for your next travel in Italy.

Stop hunting WiFi spots. Instead of paying data roaming fees or hunting free WiFi spots, stay connected everywhere and anytime with high speed WiFi. The pocket WiFi is a mobile WiFi Hotspot that you can take everywhere to get online on the go. It allows you to stay connected at all time and avoid data roaming fees when traveling abroad.
The best alternative to SIM cards.
Access unlimited data in Europe: Stay connected at all time and enjoy worry-free mobile internet everywhere in Europe.
We offer a true 4G LTE coverage: Get high-speed internet access through the largest local 4G-LTE mobile broadband network.
One flat price which includes the rental of the pocket WiFi hot spot along with your unlimited data plan.
Delivery to your staying address within 2 business days. You also get a pre-paid envelope to return the hot spot.
The mobile hot spot will give you full access to the internet. Every usual usage is possible. You will also have access to every data consuming application of your smartphone, tablet or computer (emails, interactive maps, applications or simply internet)
The pocket WiFi provides you autonomy by simplifying your access to the internet during your stay. Stay connected with your family and friends, share your travel experience and get the information you need during your trip.

It's not down in any map

“It is not down in any map; true places never are.”
— Herman Melville