Torbole at the northern end of Lake Garda

The lake with a bit of everything for everybody, from ancient ruins to lakeside promenades, historic villas to tiny villages, and medieval castles to adrenaline sports

Garda is the largest and easternmost of the Italian lakes, lapping against the flat plains of Lombardy and the Veneto at its southern extremes, and in the north becoming fjordlike and moody, its deep waters backed by the Alpine peaks of the Teutonic-inflected South Tyrolean Trentino-Alto Adige.

Garda's shores are green and fragrant with flowery gardens, groves of olives and lemons, and forests of pines and cypress.

Garda is the most sporting of the Italian lakes—with some of Europe's best windsurfing up at the lake's north end around Riva del Garda and Torbole—which goes a long way to making it a bit more family-friendly than the others (I can tell you that, when I was 12, I dug the peacocks Lake Maggiore's Borromean Islands, but otherwise the lakes were a giant snore)—to say nothing of Gardaland, Italy's greatest theme park. It isn't quite Eurodisney, but can be great fun for the younger kiddies.

Lake Garda also has more refined pleasures as well: villas and gardens, Roman ruins and medieval castles. Lake Garda has long been a haven for intellectuals and counts among its earliest Grand Tour aficionados the likes of DH Lawrence (who lived in Limone for spell), Lord Byron (who loved Desenzano), and Goethe (who spent time in Malcesine)—not to mention the larger-than-life 20C Italian writer Gabriele d'Annunzio, who built an incredible villa, Il Vittoriale, at Gardone Riviera that ranks among the lake district's most popular destinations.

Starting in the 13th century, much of the lake's eastern shores fell under the dominion of Verona's Scaglieri family, who fortified Sirmione (a postcard resort town with Roman ruins as well), Torri del Benaco, and Malcesine (where Goethe was once arrested) with terribly atmospheric medieval castles.

Lake Garda also covers the history of Italy in a nutshell, from Roman villas at Desenzano and Sirmione to medieval castles at Arco, Sirmione, and Malcesine; and from Renaissance art to the fall of Fascism (afetr he lsot the rest o Italy, Benito Mussolini's Republic of Salo was headquartered here) and rise of the Republic. All of which just goes to show: the Italian Lakes are about more than just fun in the sun and pretty vistas. 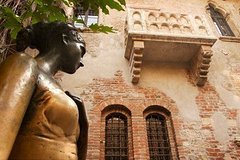 Explore the beautiful town of Verona and lakeside towns lining Lake Garda on a scenic day trip from Milan. You'll discover that Verona is one of Italy's loveliest towns, a major stop on the Shakespearean tourist trail, and be charmed by the towns and landscapes of Lake Garda.

Verona is a beautiful and romantic city, a prosperous medieval town in its own and a popular tourist destination.
The Roman Theatre is one of the most important reminders of the Roman history of the city. From here your friendly professional guide will walk you through the narrow medieval streets of the city, savoring the atmosphere of Veronas many piazzas, before arriving at the famous Juliets House.

You will see the famous balcony and take a picture with the statue of Romeos beloved girl.

Your walk continues to the ancient Roman Arena. This impressive building still hosts concerts and operas during the summer, and you will walk on his two-thousands years old stones while your guide will tell you all the secrets of this marvel of roman engineering.

Take a look at Piazza Bra, Veronas main square. Here your guide will give you the best insider tips for a typical lunch or on how to find the best gelato in tour.

Sirmione, which lies between the blue waters of Lake Garda and green olive trees, is undoubtedly one of the most romantic places on earth and its beauty has been praised by Roman poet Catullus since the early days. Visit the narrow medieval streets that burst with color and take a look at the moated castle. 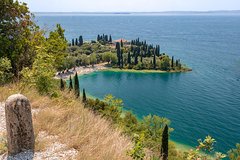 E-MTB THE TWO PANORAMAS OF LAKE GARDA - CRERO AND ALBISANO
6h | from €150
Book it
From the scenery of a fjord to the appearance of the sea: admire the variety of Lake Garda along the via del Pellegrino between Crero and Albisano immersed in nature riding E-MTBs.
Very scenic route, which from the shores of Lake Garda takes us to the town of Crero located at about 200m altitude. From here you will then continue towards Albisano and Punta San Vigilio to reach the lookout through the dirt forest "del Pellegrino".
Route of about 25km 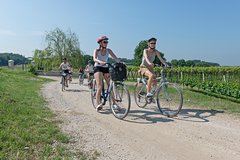 Lake Garda Wine - VR
6h | from €65
Book it
A journey to discover and admire the places where Bardolino Doc and Chiaretto are produced, typical of the hills and of the Gardesano hinterland. We will visit Villa Calicantus in the heart of the Garda hills and its small Biodynamic wine production.
A Bike Tour to experience a unique experience, you will discover the hills of the Garda hinterland, famous for the presence of vineyards and olive groves, from which typical products are obtained such as the red Bardolino Doc or the Chiaretto ideal for aperitifs and typical oil of Lake Garda thanks to its mild temperatures even during the winter season that favor the cultivation of olive groves. Reached Rivoli Veronese, you will enjoy a marvelous view of the Val d'Adige also known as Terra dei Forti, due to the presence of defensive structures built between the Italian Risorgimento by the Austrians to defend the borders.

Possibility of tasting at this winery 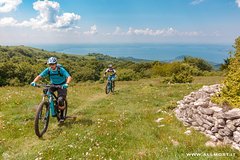 E-MTB TOUR LAKE GARDA - ON THE WORLD CREST - IL FORTE DI NAOLE
6h | from €150
Book it
When looking for a respite from the summer heat of the plain, in those days when even the water of the lake is not sufficiently cool, the direction to look at is inevitably the mountain.
In just a few minutes of travel, from the shores of Lake Garda you can easily climb at altitudes where the air gets fresh and the energy regains vigor.
The starting point for this adventure will therefore be almost at an altitude of one thousand: we will travel along a forest road that climbs up Mount Baldo, alternating sections in the shade of chestnut, beech and birch trees, with panoramic views to the south and east, a prelude to the experience we will experience once they reach their destination.
Our E-MTB Focus Jam2 LTD Plus will allow us to decide whether to work hard and train a little, going up with minimum assistance in "ECO" mode, or enter the "boost" mode of the fantastic Shimano Steps 8000 electric motor and enjoy the fresh air and the panorama without effort!

Intermediate stage with panorama and possibility to stop in pastry shop 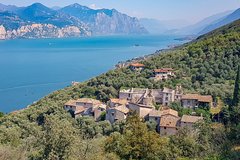 E-MTB ON THE "FIORDO" OF LAKE GARDA - CAMPO DI BRENZONE
6h | from €150
Book it
An E-MTB excursion to discover the places where Lake Garda magically turns into a fjord
We are immersed in a quiet paradise a few hundred meters above one of the most popular tourist areas of Italy, sufficient height to allow us to hear the sound of nature
Given the type of mule track, it is possible to study a specific itinerary to meet your specific needs: do not hesitate to ask us for information before making a reservation

We will visit the rural architecture of this abandoned district, suspended in a time now finished for decades, which still today offers glimpses and emotions all to be experienced

Stroll the forested paths around Lakes Como and Garda, unwind through the Dolomite highlands and just keep whetting and sating that appetite with classic Italian delicacies.

Ferry to and fro between lake villages and villas that keep getting prettier, and clamber about the crumbling ruins of medieval castles.

Idyllic in setting, laid-back in lifestyle, and a gastronomist's delight, this jaunt through one of Europe's most charming nooks shouldn' disappoint.

And if it does, take the issue up with one of the local residents — like Sting or George Clooney.

Garda has an interesting geo-political situation.

It actually borders on three very different Italian regions: Lombardy to the west (part of the proivince of Brescia), the Veneto to the east (part of the province of Verona), and the northern tip juts up into the Trentino Alto-Adige.

Now, every Italian region is proudly different, but some are more different than others, and the Trentino is so solidly Tuetonic that beer and sausages replace wine and pasta on the menus and, though everyone speaks Italian (and, as it's a tourist destination, English) the local dialect is actually a medieval form of German called Tirolesische. This is the beginning of the South Tyrol cultural region, the northern half of which is in Austria around Innsbruck.

Also, this means that the tourism infrastructure—tourist offices and websites, local bus networks, etc—is split between those three regions. This can make it a bit frustrating to gather intel on the lake as a whole.