A detail of the 14C frescoes in the apse

Standing forlorn in Como's industrial suburbs, the Basilica di Sant'Abbondio is a solid Romanesque church raised by Benedictines between 1050 and 1085 on the edge of town, near the train tracks (or rather, where the train tracks are now, as the medieval Benedictines didn't have railroads).

The church retains the pair of belltowers and extended choir that architecturally link it the Westwerk style of medieval Germany (though it's the work of local masons). The columns—the whole building, really—are made of stacked black stones, about twice brick-sized, most of which had a gray patina except when wetted.

The apse inside was gorgeously frescoed in the 14C with a comic book of Biblical scenes that, thanks to a restoration, are as vividly colored as day they were painted.

The rather wide altar houses a trio of silver-faced bishops resting in peace side-by-side in their colored robes and clutching mighty shepherd's staffs. At least I think they're the bishops. They could just be giant dolls—er, cloth effigies. I base this partly on the fact that their gloved fingers look sort of squished in the way a scarecrow's can be. Also, the other bishops tipped me off.

Four smaller altars flank the apse, and in outer two are housed the remains of two more bishops-under-glass, only these two are only about 3 1/2 feet tall. Rather than assume that Como has had a history of midget bishops (it certainly has had a plethora of them, to judge by how many were hanging about this out-of-the-way church), I am assuming these bishopric effigies are truncated merely to fit in the tight space of an altar in a narrow side chapel.

Either that, or the authorities removed the middle bit of the bishops to make them fit, and I'd rather not entertain that possibility. 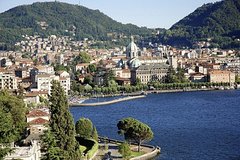 Day Trip to Como from Milan
6h | from €120
Book it
Enjoy a beautiful day discovering the town of Como and its famous lake.

Lake Como is a lake of glacial origin in Lombardy, Italy. It has an area of 146 square kilometres (56 sq mi), making it the third-largest lake in Italy, after Lake Garda and Lake Maggiore. At over 400 metres (1,300 feet) deep, it is one of the deepest lakes in Europe, and the bottom of the lake is more than 200 metres (660 ft) below sea level.

The Basilica of San Fedele in Como is located in the city center and is dedicated to Saint Fidelis martyr. It derives from an earlier Christian church, dating from the seventh century, dedicated to Euphemia.

The Basilica of Sant'Abbondio is a Romanesque-style 11th-century Roman Catholic basilica church located in Como, region of Lombardy, Italy.

Broletto is a medieval building with some Gothic elements. It used to be Como municipal building, starting from XIII century. Citizens used to gather in front of Broletto called by a bell installed in Broletto's tower. Broletto is situated in between Como cathedral and the bishop's palace. Nowadays it hosts art exhibitions and events.

Teatro Sociale is a theatre in Como, designed by architect Giuseppe Cusi following a decision by the local nobility that a new one was needed to replace the existing 1764/65 building which was regarded as outdated. The site of the ruined medieval castle, Torre Rotonda, was the chosen location and the Società dei Palchettisti was created by membership subscriptions to fund its creation.

Porta Torre (tower) was built in 1192. It is part of the town walls and the most interesting medieval monument. It is located in the south side of the town. It is 40 meters high with arches and it used to be the main entrance for people coming from Milan. 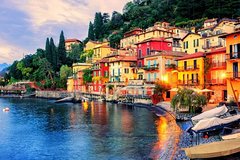 Views of Lake Como: Day Trip from Milan
8h | from €126
Book it
An hour's train ride north of Milan you'll find the breathtaking Lake Como, where you can taste la dolce vita and enjoy the beauty of one of the most enchanting of the Italian Lakes. Discover the most magical spots along the shores of the lake, from the elegant villas of Como city to the colourful, rustic hamlets that are dotted along the water's edge and soak up the stunning scenery. Glide along the lake on a cruise, seeing the charming villages from another angle and watching the crystal clear waters change from deep turquoise to azure blue, or head up into the mountains for panoramic views from the village of Burate. Enjoy the fresh air and a day out of the city with your local, who will share more of the region's culture, cuisine and beauty with you!

Join a like-minded local and swap city life for la dolce vita in the villages dotted around the banks of Lake Como, which is just an hour's train ride away from Milan. Hop off the train in Como, where you can explore the lake's namesake city - wander through the historic centre with its medieval porticoes and romantic architecture, stroll to the main dock where you'll see beautiful neoclassical villas and visit the 11th century Basilica of Sant'Abbondio. It's impossible to say which season the lake is the most beautiful in! In the summer months, hop back on the train and head to Varenna, a charming town on the east of the lake where you can take the ferry between Lake Como's holy trinity of the towns and villages of Varenna, Menaggio and Bellagio. Explore these charming spots at your own pace, soaking up la dolce vita, wandering along cobbled streets and enjoying the spectacular views of the lake from its shores. During the winter months, you'll take the funicular from Como to the charming village of Brunate that's nestled in the mountains, where you can enjoy spectacular views of the lake from above. Whichever time of the year you visit, you'll also enjoy a cruise around Lake Como, where you'll get the best views of the elegant villas and neoclassical hotels that are dotted along the shores of the lake, and see the colourful villages and hamlets that you've explored from another angle. Enjoy lunch with your local host at an trattoria or osteria along the way, getting an authentic taste of the region's cuisine!