The Romanesque took its inspiration and rounded arches from ancient Rome (hence the name). Romanesque architects concentrated on building large churches with wide aisles to fit the masses who came both to hear the priests say Mass, but mainly to worship at the altars of various saints.

But to support the weight of all that masonry, the walls had to be thick and solid (meaning they could be pierced only by few and rather small windows) resting on huge piers, giving Romanesque churches a dark, somber, mysterious, and often oppressive feeling.

Modena's Duomo (12th century) marks one of the earliest appearances of rounded arches, and its facade is covered with great Romanesque reliefs; Cremona's Duomo is no slouch either. The Basilica of Sant'Ambrogio in Milan (11th–12th century) is festooned with the tiered loggias and arcades that would become hallmarks of the Lombard Romanesque.

When Pisa became a major medieval power, it did so through a huge shipping empire, and with this trade came contact with eastern and Islamic cultures. As Pisa poured its 11th-century prosperity into building a new religious core and cathedral, it adapted many of the decorative elements it had picked up from these eastern contacts. The style that was developed in Buschetto’s Duomo and the associated baptistery and bell tower (yes, the one that leans) came to define a new style that quickly spread across the north of Tuscany called the Romanesque.

The purest, earliest form that arose in Pisa and Lucca—known, sensibly, as the Pisan-Luccan Romanesque—was characterized most strikingly by horizontal stripes of marbles—green and white and later, in Siena, black and white—on the facades and eventually some interiors as well.

The later form of the movement that was adapted in Florence (the baptistery, San Miniato al Monte, and Badia Fiesolana) and Pistoia (San Giovanni Fuoricivitas and, although later somewhat altered, the Duomo) was called the Florentine Romanesque. While on the surface it was very similar to the Pisan-Lucchese school, it was practiced along much stricter lines of a geometry gleaned from Classical architecture—a predecessor to the mathematically proportional architecture of the Renaissance.

Where to find Romanesque architecture in Italy

From this 4C church, St. Ambrose—bishop of Milan when the city was briefly capital of the Western Roman Empire—had a profound effect on the development of the early church

A mountaintop abbey with great views and Romanesque frescoes

A tiny Romanesque church in Bellagio

One of the finest examples of Romanesque architecture in northern Italy

The gorgeous, mosaic-columned cloisters of the Monreale Cathedral—formally known as the Chiostro Santa Maria la Nuova

The Romanesque cathedral with 16C frescoes by Correggio and others

A genteel piazza surrounded by Gothic and Renaissance palazzi

A Lake Garda town famous for its wine since antiquity

A beach town and Romanesque church on Garda's western shore

The Romanesque-Gothic cathedral of Assisi and its small museum

Ravello's "cathedral" has some lovely Romanesque mosaics and carvings

The sad story of the Santo Bambino at the Capitoline church

An ancient church of healing on Tiber Island

The oldest church in Pisa with a lovely Romanesque chapel

An octagonal Romanesque church by the Arno

A Romanesque-Gothic church with a Giovanni Pisano inside

A Romanesque church with lovely altarpieces

A Romanesque church with some lovely altarpieces

The rudiments of a Roman temple 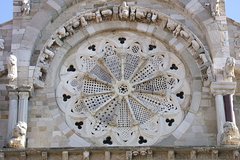 Troia walking tour: Apulian Romanesque architecture
2h | from €173
Book it
Troia was the ancient Aece, a Roman city on the Appian-Trajan Way. The tour will take you to know the historic center with a magnificent view on the Dauni mountains and its splendid cathedral.
The tour will make you visit the heart of the town with a visit to the church of St. Vincent the Martyr, Basilica of St. Basil and St. Francis in Baroque art and major palaces such as the palace of the princes D'Avalos, Palazzo Varo and Palazzo Siliceo .
The tour ends with a visit to the cathedral dedicated to the Blessed Virgin Mary of the Assumption built in the twelfth century and in the Apulian Romanesque style on a church of Byzantine origins. Certainly the most beautiful part is its rose window composed of 11 stone columns and twenty-two different decorations obtained exclusively with the technique of the fretwork, making the rose appear as a laced embroidery. The most beautiful rose window in Puglia. Also worthy of note is the bronze portal with its 2 wonderful dragon-shaped knockers. 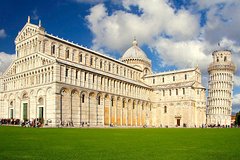 Pisa: a "Maritime Nation", "Pisan Romanesque" style and the "Leaning Tower"
5h | from €90
Book it
Visit the best known Tuscan city of Pisa! This tour will be custom made according to your requirements and it can be adjusted as you go.
The place to visit in Pisa is the "Field of Miracles", where Pisas numerous legendary monuments stand: the Leaning Tower, the cathedral, the "Campo Santo" cemetery, the Baptistery, and the cathedral museum.

Pisa, the birthplace of Galileo Galilei, is famous for its architectural works of art and has a lot to offer. It is situated in a vast plain on a level with the sea and divided in two by the River Arno. The first place to visit in Pisa is the "Field of Miracles", where Pisas numerous legendary monuments stand: the Leaning Tower, the cathedral, the "Campo Santo" cemetery, the Baptistery, and the cathedral museum.  A few years ago, after a long restoration, the tower was reopened and now you can go to the top to admire the view. Other amusing sights include: Museo delle Sinopie and Museo Nazionale di S. Matteo , the Knights' Square or Piazza dei Cavalieri - the church of Santo Stefano dei Cavalieri, the botanical garden Orto botanico di Pisa, the Gothic church of Santa Maria della Spina, The Palazzo Reale  The Royal Palace, Museo dell'Opera del Duomo

The gladdest moment in human life

“The gladdest moment in human life, me thinks, is a departure into unknown lands.”
— Sir Richard Burton