The Gothic started infiltrating Italy as architecture. It was originally imported by French Cistercian monks, who in 1218 created near Montalcino the huge San Galgano abbey church, now roofless (and terribly romantic).

By the late 12th century, engineering developments—most significantly the pointed arch, which could bear a much heavier load than a rounded one—freed architects from the heavy, thick walls of Romanesque structures and allowed ceilings to soar, walls to thin, and windows to proliferate.

Instead of dark, somber, relatively unadorned Romanesque interiors that forced the eyes of the faithful toward the altar and its priest droning on in unintelligible Latin, the Gothic churchgoer's gaze was drawn up to high ceilings filled with light, a window unto heaven. The priests still gibbered in a dead language, but now peasants could "read" the Gothic comic books of colorful frescoes lining the walls and panels in stained glass windows.

In addition to those pointy arches, another Gothic innovation was the famous flying buttress. These free-standing exterior pillars connected by graceful, thin arms of stone help channel the weight of the building and its roof out and down into the ground.

To help counter the cross-forces involved in this engineering sleight of hand, the piers of buttresses were often topped by heavy pinnacles or statues. Inside, the general pointiness continues with cross vaults: The square patch of ceiling between four columns instead of being flat would arch up to a point in the center, creating four sail shapes, sort of like the underside of a pyramid with bulging faces. The "X" separating these four sails was often reinforced with ridges called ribbing.

As the Gothic style progressed, four-sided cross-vaults would become six-, eight-, or multi-sided as architects played with the angles they could make. In addition, tracery—delicate, lacy spider webs of carved stone curly-cues—graced the pointy end of windows and just about any acute angle throughout the architecture.

The true, French-style Gothic only flourished in Northern Italy, and the best example is Milan's massive Cathedral, a festival of pinnacles, buttresses, and pointy arches begun in the late 14th century. Venice's I Frari is a bit airier and boxier; Padua's Basilica di Sant'Antonio is largely Gothic, though its Romanesque facade and Byzantine domes try to throw you off. In palace architecture, the Venetian developed a distinctive style of insetting lacy, lithe, pointed marble windows with a distinct eastern flair into pale pastel plaster walls. This is seen in countless palaces across Venice, but most strikingly in its most lavish: Ca' d'Oro, Ca' Foscari, and the model against which all were measured, the Palazzo Ducale itself.

Although the classic, French style of the Gothic never caught on, the church was still at the time revolutionary in introducing some of the new forms, which were adopted when Giovanni Pisano overhauled Siena’s cathedral and Gothicised it. Gothic architecture introduced the pointed arch, the concept of a high hall church—which the Tuscans still wanted held up by a timbered roof—with either aisles almost as high as the nave or no aisles at all, and a bit of that lacy stone frills theme and the idea of facades studded with statues.

The preaching orders of monks were responsible for Gothic architecture’s spread. Since it allowed for huge, barn-like churches with a single wide nave and few supports, the architecture was convenient for Dominicans and Franciscans who needed to be able to pack throngs of people into the churches to hear their sermons. Almost every major city has at least one of their huge, usually aisleless churches with a rounded apse or squared-off choir behind the altar and a short transept of chapels off either side of it.

The thin-columned windows and lace-like stone tracery the Gothic used to fill up arch points and the crenellations it strewed across the tops of buildings both caught Tuscan fancy, and were incorporated into many palaces[md]especially in Siena—where the architectural forms otherwise pretty much stayed the same old solid, reliable medieval masonry. Out of this marriage were born the civic palaces of Siena and more importantly of Volterra, which served as the model for Florence’s own famous Palazzo Vecchio (and similar buildings across the region).

The Palazzo Vecchio’s architect was Arnolfo di Cambio, the Gothic master of Florence’s building boom in the 1290s. Arnolfo was also responsible for the Franciscan church of Santa Croce and the original plans for the Duomo. The kind of Frankish Gothic building most people associate the term, with lots of spires and stony frills, really only showed up in the tiny carved stone jewel of Santa Maria alla Spina along the banks of the Arno in Pisa.

Orcagna, who was also a painter, gave us another bit of this sort of Gothic in miniature with his elaborate, marble-inlaid tabernacle in Florence’s Orsanmichele (the church also a Gothic structure itself, but an odd one), but Orcagna was really already moving toward the Renaissance when he designed the wide-arched and proportioned space of the Loggia dei Lanzi on Florence’s Piazza della Signoria.

Where to find Gothic architecture in Italy

The Leaning Tower of Pisa is world's most famous bell tower, and an icon of pizza boxes everywhere

The gothic Palazzo Ducale with its Renaissance art and hidden rooms

The Cathedral of Milan is one of the largest Gothic churches in the world, an intricate festival of soaring spires and statuary

The glorious Gothic cathedral of Pisa

The Titians, Bellini, and Donatello in the church of Santa Maria Gloriosa dei Frari

Santa Croce church is the Westminster Abbey of Florence: The tombs of Renaissance giants Michelangelo, Machiavelli, Galileo, and Rossini (plus some great Giotto frescoes—and a renowned leather school)

The Campanile di Giotto is one of Italy's loveliest bell towers

The most beautiful cloisters in Naples

More about Duomo of Orvieto

✝
The Duomo
The Duomo
Around Siena's Duomo
TicketsTours

Burrow through 2,500 years of Neapolitan history in this best of Naples' churches

A gorgeous, miniature pile of Gothic spires by the Arno

A Gothic church filled with great art by Perugino and others

Sculptures by Michelangelo and Bernini, the bodies of Fra' Angelico and St. Catherine, and the tombs of two Medici popes—so why isn't this church right behind the Pantheon more famous?

A church by the river with amazing, courtly Renaissance frescoes by Ghirlandaio

A Gothic church (and Siena landmark) housing the relics of St. Catherine of Siena

A genteel piazza surrounded by Gothic and Renaissance palazzi

Gothic, Renaissance, and baroque art masterpieces in a Neapolitan church

The oldest Gothic palazzo in Siena

Beautiful Gothic paintings and a reference in English literature

The oldest church in Pisa with a lovely Romanesque chapel

A Gothic facade and Pisano carvings

A medieval city gate with a Siense-School fresco

A pretty medieval fountain just outside the city gates

A Gothic church with works by the Lorenzetti Brothers 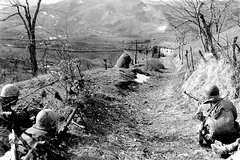 Private tour: The Gothic Line in Borgo a Mozzano (Lucca)
3h | from €160
Book it
During this private 3-hour guided tour of the Gothic Line you will visit the Museum of the Liberation, enjoy a walking tour exploring two of the area's World War 2-era bunkers. Climb, with your guide, aboard your vehicle and visit a third bunker, and walk across the famous Devil's Bridge from where you may enjoy panorama of the river and surrounding hills.

Meet your personal specialized guide is in front of the train station in Piazza Marconi (Borgo a Mozzano) in the morning, or afternoon. The first stop is just a few steps away at the small, but evocative museum, Museo della Memoria, which features many World War II documents in relation to Lucca and the construction of the Gothic Line. The museum also contains uniforms and arms of both the Allied and German Armies, a series of objects issued to the troops, an exhaustive number of communiques released by the fascist prefect in regard to curfews, circulation restrictions, black market sales restrictions, photos, and documents of the local Resistance fighters.
Note: Should you not have a car, you may reach Borgo a Mozzano by train.

Next, take a 10-minute walk to the two low-lying bunkers built to defend the antitank wall of the Gothic Line at Borgo a Mozzano. To defend the front, the Germans constructed two large, deep bunkers excavating them in the rock. The soldiers used them as observation posts, ready to defend the antitank wall of the Gothic Line with cannons and machine guns.
To visit a third incredible bunker, you must take your car and drive to the nearby medieval hamlet of Anchiano. The bunker extends for many meters into the hill below the church of the village. To defend the left side of the river and the Gothic Line, the Todt Organization had this extraordinary fortification constructed for cannons, machine guns, and observation posts.

Hop into your car again, and proceed to the legendary Ponte della Maddalena (Bridge of Mary Magdalene), better known as the 'Devils Bridge'. It was constructed during the Middle Ages so pilgrims traveling from northern Italy and Europe could cross the river on their way to Rome. This was the only bridge across the Serchio River that the Germans did not destroy during the Second World War, and proved to be a huge strategic error on their part. It is a humpback bridge with asymmetric arches and can be crossed on foot. At its highest point, there is a splendid panorama of the river and surrounding hills. 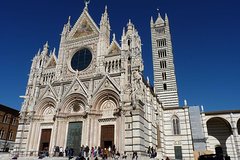 Small Group Tour: Super Tuscan, Classico wines and Siena, a Gothic Jewel
6h | from €45
Book it
Get a personalized tour of Siena region during this 6-hour private excursion from Florence. With just your group and dedicated guide, explore the square of Siena. Round-trip private transportation from a meeting point near the Florence train station included. Highlights 6-hour tour of the Tuscan Siena region from Florence Round-trip transportation from the Florence train station Visit Siena and learn about the historical towns of Siena and the Sangiovese grapes.

Visit the squares of Piazza il Campo and Piazza Duomo in Siena.
Admire the Tower of the Mangia, the third highest in Italy, the "Public Palace" and "Fountain Gaia. Relax at a local cafè.

Stop At: Via delle Volte, Castellina In Chianti, Tuscany

Learn about the world famous "Chianti Classico" wine and the Sangiovese grapes. Visit the middle age stronghold of Castellina in Chianti. Admire the scenic "Chiantigiana" views.