In General
Across Italy

more
Artist
In General
Across Italy

Milan's Brera is one of the top painting galleries in Northern Italy, with works by Raphael, Caravaggio, Tintoretto, Mantegna, Bellini, and Piero della Francesca

Milan Skip-the-Line Brera Art Gallery Ticket
2h | from €19
Book it
The Brera Art Gallery (Pinacoteca di Brera) is the main museum of Milan, and one of the most important in the world for its prestigious collections of ancient and modern painting, with masterpieces from the 13th to the 20th century. A large part of the collections stems from Napoleonic times, when churches and convents were required to cede their works of art to the government.

The Brera Art Gallery is located in the Brera Palace, former convent of the Humiliati order from the 1300s. Other cultural institutions are also located here, such as the Library, the Astronomic Observatory, the Botanical Garden, the Lombard Institute of Sciences and Letters, and the Fine Arts Academy.
When Milan became capital of the Kingdom of Italy, some of the most important paintings appropriated by Napoleon in Italy came to the Brera. Most of them arrived from the Veneto, from the Sampieri Gallery in Bologna, and from the Quadreria Vescovile in Milan. In 1813, following a pact with the Louvre Museum, Brera received five paintings by Rubens, Jordaens, Van Dyck, and Rembrandt, to represent the Flemish school of the 17th century. 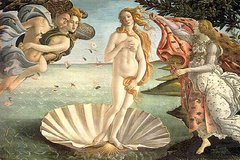 Private Tour: Uffizi Gallery and Italian Happy Hour Aperitif
3h | from €76
Book it
This Private tour will show you the Uffizi Gallery, one of the most popular tourist attractions of Florence. Thanks to this tour you will be guided by a local and professional guide and you will admire paintings by masters including Botticelli, Leonardo da Vinci, Raffaello, Michelangelo, Caravaggio and some more.

This is one of the most famous museums of paintings and sculpture in the world. Its collection of Primitive and Renaissance paintings comprises several universally acclaimed masterpieces of all time, including works by Giotto, Simone Martini, Piero della Francesca, Fra Angelico, Filippo Lippi, Botticelli, Mantegna, Correggio, Leonardo da Vinci, Raphael, Michelangelo and Caravaggio. German, Dutch and Flemish masters are also well represented with important works by Dürer, Rembrandt and Rubens.
The Uffizi Gallery occupies the top floor of the large building erected by Giorgio Vasari between 1560 and 1580 to house the administrative offices of the Tuscan State. The Gallery was created by Grand-duke Francesco I and subsequently enriched by various members of the Medici family, who were great collectors of paintings, sculpture and works of art. The collection was rearranged and enlarged by the Lorraine Grand-dukes, who succeeded the Medici, and finally by the Italian State.
During your tour, pay a visit to the Uffizi's rooftop terrace and soak up its gorgeous views of the Arno River, Ponte Vecchio bridge and Piazza degli Uffizi, the museums statue-lined inner courtyard.
Once you will start to feel tired, your guide will bring you in a very interesting coffee-shop to have an Italian aperitif, tasting some typical cocktail or soft drink with snacks, panini, gelato, cookies and so on... a true temptations of gluttony! 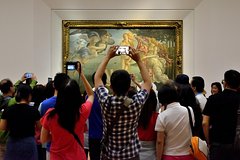 Private Tour of Uffizi Gallery and Santa Croce Basilica
2–3h | from €94
Book it
The Uffizi Gallery and Basilica of Santa Croce are undoubtedly two of Florences must-see attractions. With its breathtaking works by Botticelli, Lippi, Michelangelo, Raphael, Leonardo de Vinci, Caravaggio, and Rembrandt, just to name a few, its not hard to see why the Uffizi Gallery is one of Florences most popular museums. Yet its sheer scale and long lines can leave visitors frustrated and overwhelmed. Not to worry! With our exclusive tour service, youll skip the lines and your private tour guide will steer you to all the most important works, detailing their individual histories and significance.

In this tailor-made tour, your expert English-speaking guide will bring the endless corridors of the most popular museum of Florence to life with enchanting and educating anecdotes about your favorite Renaissance artists, including: Leonardo da Vinci, Michelangelo, Botticelli, Raphael and others.
There is a lot to see in Florence and because we know your vacation time is limited and precious, weve tailored this private tour experience to only 2 hours inside the Uffizi. See the famous paintings and sculptures, adored by millions of visitors, in one of the oldest, most renowned art museums in the world.
Visiting the museums on your own, it could take several hours and the many masterpieces, without the valuable explanations of a tour guide, could easily overwhelm you. Dont waste your valuable time and risk missing the masterful works you came to see. Let us walk you past the crowds with our VIP skip the line tickets and straight to the highlights crafted by the gifted hands of Botticelli, Leonardo da Vinci, Michelangelo, Raphael, and others.
On this tour youll admire the spectacular The Birth of Venus painting. Botticellis provocative portrayal of the goddess rising from the sea in a giant shell escorted by angels, as well as Primavera, the famed portrayal of gods and muses prancing through a garden of rich vegetation. Youll gaze at the genius of Leonardo da Vinci, Michelangelo and Rafael with glimpses into other well-known masters, working your way from the Medieval to the Modern Age of Italian art.

After exploring this unparalleled collection youll venture on to the worlds largest Franciscan church, the Basilica of Santa Croce. The basilicas interior possesses great artistic wealth with Giotto and Donatello being among its contributors. Yet, Santa Croce is best known for the many talented people buried there, and for whom it has been given the nickname the Temple of the Glories. Galileo, Machiavelli and Michelangelo are among its eternal residents. Join us for an unforgettable adventure into the lives and works of some of Florences most fascinating characters.

Dark Art - Private Tour of Caravaggio's Rome
120–210m | from €69
Book it
This is a fully private and exclusive walking tour which covers brawling genius Caravaggio's life and works in Rome. Were the rays of light which illuminated his finest creations a fair reflection of his extreme lifestyle? Time spent with your expert Art Historian guide is approximately 2 hours and you will catch the very best works of Caravaggio in the beating heart of historic Rome!

From stock painter for Roman Mannerist Guiseppe Cesari at the turn of the 17th century to his first commission in the Church of San Luigi dei Francesi, we cover the life, works, and escapades of Caravaggio when in Rome. Understand his considerable influence as a Baroque artist and the concept of Tenebrism.
Michelangelo Merisi da Caravaggio was tutored by Simone Peterzano in Milan, who himself was one of Titian's protégés in Venice. Caravaggio's style of portraying common people in every day situations with "dramatic chiaroscuro", where a shaft of divine light illuminates the main subject from an unclear origin to leave the rest of the scene in obscurity, sets his work apart from his peers.
Between 1596-1604, Caravaggio was perhaps the most famous painter in Rome. Prolific, too, in light of the fact that he was handed many commissions. Praised by Cardinal and benefactor Francesco Maria Del Monte, whose residence was Palazzo Madama (the seat of the Italian Senate today), Caravaggio's life in Counter-Reformation Rome was centred around Piazza San Luigi dei Francesi until he moved into the palace to work. His newest creations were often inaugurated in churches, some of which have not been moved since their unveiling on hallowed ground over 400 years ago. The way in which Caravaggio portrayed gamblers, peasants, prostitutes, and the darker side of street life - in which he had his own fateful part to play - provoked outrage, so much so that he was forgotten in death until the turn of the 19th century. It is believed that Caravaggio prowled the streets around Piazza Navona dressed head to toe in black with a black dog by his side. Despite his reputation as a hell-raising rabble rouser, Del Monte's contacts and influence thrust Caravaggio into the spotlight. The powerful Cardinal Scipione Borghese, patron of Bernini, became an avid collector of his work.
This tour covers Caravaggio's finest works, the places where he lived and worked, where he drank, and where it is believed he killed. We begin with the Church of San Luigi dei Francesi (serialization of the life of St. Matthew adorning the Contarelli chapel, 1600) between the Pantheon and Piazza Navona. Doria Pamphili Gallery is next wherein hangs "Penitent Magdalene" (1594) and "Rest on the Flight into Egypt" (1597). We conclude inside the Capitoline Museums' Pinacoteca to see "St. John the Baptist" (1602). Caravaggio was a great influence on Peter Paul Rubens who was in Rome at the same time, and Rembrandt, who practiced a particularly theatrical form of "chiaroscuro".
"In painting not equal to a painter, but to Nature itself". (Marzio Milesi, August 15th, 1610)

"Our happiest moments as tourists always seem to come when we stumble upon one thing while in pursuit of something else."
— Lawrence Block