Europe's oldest foundling hospital, opened in 1445, is still going strong as a convent orphanage, though times have changed a bit.

The lazy Susan set into the wall on the left end of the arcade—where once people left unwanted babies, swivelled it around, rang the bell, and ran—has since been blocked up.

The colonnaded portico ★ (built 1419–26) was designed by Filippo Brunelleschi when he was still an active goldsmith.

It was his first great achievement as an architect and helped define the new Renaissance style he was developing.

Its repetition by later artists in front of other buildings on the piazza makes Piazza SS. Annunziata one of the most exquisite squares in all Italy.

The spandrels between the arches of Brunelleschi's portico are set with glazed terra-cotta reliefs of swaddled babes against rounded blue backgrounds—hands-down the masterpieces of Andrea della Robbia, commisisoned around 1490.

The institute inside also has a small museum in the Long Gallery housing a pinacoteca of Renaissance altarpieces, one of the greatest of which is by Domenico Ghirlandaio: an 1484–88 Adoration of the Magi.

Also be on the lookout for a very early Botticelli (a 1465 Madonna and Child with Angel painted at the age of 20, and pretty much a copy of a piece by his matser Filippo Lippi), as well as for altarpieces by Piero di Cosimo (Madonna Enthroned), along with another Luca della Robbia masterpiece, the 1445–50 Madonna and Child.

Also here are a series of large detached frescoes (1575) from Ognissanti by Alessandro Allori. 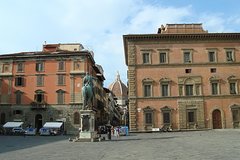 Spedale degli Innocenti Private Tour
1 hour 30m | from €39
Book it
Visit an historical building in Florence. Just reopened, the Spedale degli Innocenti is located in one of the first very famous Renaissance architecture in the world, created by Filippo Brunelleschi, in the beautiful Piazza Santissima Annunziata in Florence. The Chiildren Hospital  was born into a legacy for creating a place for the care and support of children abandoned during the Renaissance in Florence. Rich in works of art, paintings and sculptures, it offers the visitor the opportunity of meet the histories and the personal belongins of the abandoned children of the past

The Innocenti was responsible for the care of abandoned children and provided them with the ability to rejoin society. Today Spedale degli Innocenti houses two kindergartens, three family homes for the reception of children, and some of UNICEF offices. The clean and clear sense of proportion is reflected in the building. The height of the columns is the same width of the intercolumniation and the width of the arcade is equal to the height of the column, making each bay a cube.
Inside is the new Museum of the Innocents renovated and expanded, 24 June 2016. It is a very unique museum with its history on the reception lasting over 600 years. Also there is the personal memories of the "Nocentini" - so were called the children welcomed here - housed in the structure, a gallery with important works of art by Ghirlandaio, Botticelli other artistic rarities await them!
Art, architecture and history of childhood are united in a thrilling tale of one hour and 30 minutes. 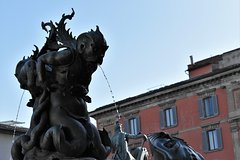 A more Unusual Florence
3h | from €65
Book it
A tour that wants to show you a less obvious side of the city. A route will start from a visit to the interiors of the church of Santa Maria Novella and then take you to visit L'Officina Perfume of the Friars, Palazzo Strozzi, Via Tornabuoni with its prestigious shops, the church of Santa Trinità with its masterpieces of the Renaissance, passing for Piazza della Signoria and the Duomo and then conclude between the arcades of Santa Maria Annunziata and the hospital of the innocents.

The Dominican Basilica houses the famous Renaissance frescoes by Masaccio and Ghirlandaio. The monumental cloisters make the atmosphere of the convent even more evocative.

The oldest pharmacy in Florence, restored and renovated, includes the ancient areas of production of herbs and medicines.

Palazzo Strozzi is the Renaissance palace par excellence, massive and monumental, testifying to the glorious past of the city.

The most elegant street in Florence, today a destination for shopping lovers from all over the world.

The Gothic church preserves priceless art treasures, from the Ghirlandaio frescoes to the crucified miracle of the Vallombrosian monks.

The square is the center of civic life in the city, rich in statues and famous for the Loggia dei Lanzi, a real open air museum set up over the centuries with ancient and modern statues.

The cathedral of Florence is the most connected church to the history of Florence, full of masterpieces of every era. Famous the frescoes of the dome, the Renaissance windows and the crypt.

The square is one of the most beautiful in Florence, including the arcades and the Spedale degli Innocenti, the oldest orphanage in the world. 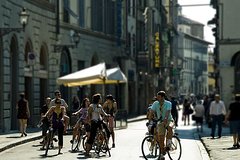 Photography Bike Tour of Florence
2h | from €35
Book it
Lense on Florence: take a private guided trip through the historical centre of Florence.
Learn about the art and history of this city, see and photograph some of its most compelling views and highlights.

This bicycle tour allows you to cover more of the city on a photographic odyssey through Florence, visiting both well known sites and hidden gems. You'll stop at the best vantage points to take the perfect picture. At the end of the tour, the best photo taken, as judged by a photography expert, wins a prize.
The entire center of the city is a UNESCO World Heritage Site and this eco-friendly tour departs from the home of the National Archaeological Museum and Spedale degli Innocenti, Piazza Santissima Annunziata, .
Continue through aristocratic streets and stop at the Synagogue and the historic Flea Market. Pause for a photo in front of Santa Croce Church, a symbol of Florence, known for its stunning 14th-Century frescoes.
Leaving the Santa Croce district, you'll pass the home of Michelangelo and cross over the Arno River via the famous Ponte Vecchio. Visit Porta San Niccolò, Pitti Palace and the Santo Spirito Church, containing a crucifix carved by Michelangelo, before cycling back over the Arno to Piazza Signoria.
Stop to catch your breath and snap a photo at the Neptune Fountain and the magnificent Medici Palazzo Vecchio.
No trip to Florence is complete without seeing Piazza Repubblica and the extraordinary Duomo, the last stops of the 2-hour tour.
The easy-to-operate bicycles come with helmets for your safety and an audio system so that you can easily hear your personal tour escort.

Get into Spedale degli Innocenti for free (and skip the line at the ticket booth) with:

Just to peek at the facade takes all of 2 minutes.

To peruse the paintings inside, give it another 25–40 minutes.

How to paint a fresco

D.I.Y. your very own Renaissance fresco!

Life is either a daring adventure

“Life is either a daring adventure or nothing at all.”
— Helen Keller