Savonarola and the Bonfire of the Vanities ★☆☆

Fra' Girolamo Savonarola was a firebrand preacher, the "Mad Monk" who briefly turned Florence into a theocracy and church-run police state and who started the original "bonfire of the vanities"

Fra' Girolamo Savonarola (1452–1498) was a Dominican friar and religious fundamentalist from Ferrara who moved his ministry to San Marco in Florence in 1490 (he actually had first preached here in the 1480s, but didn't leave much of an impression).

Things were different the second time around. He preached a firebrand vision of Christianity, full of the doom and gloom of the Last Days and admonishments to abide by strict religious rules and eschew all vice and vanity to avoid being on the wrong side of the scales come Judgment Day.

It was an apocalyptic, fundamentalist, moral reductionist, my-way-or-the-highway message, bolstered by threats of punishment—both to one's soul in the afterlife and, as his power grew, to one's own body in the here and now—for those that refused to follow his exact teachings.

Within four years had a sizeable chunk of the city's population under his sway, and when Charles VIII of France ousted the premier Medici family in 1494, Savonarola seized the chance to step in to fill the void of unofficial city leader.

Savonarola swiftly created a theocratic republic, with himself at its head, and began enforcing his own strict brand of religious purity upon the hapless citizens of Florence.

He closed the taverns and outlawed gambling, singing, and dancing.

He turned crimes like sodomy, previously merely punishable by fine, into capital offenses for which the sentence was death.

Savonarola's reign quickly escalated to near Fascist levels of autocratic rule. The friar-in-chief ignored the Vatican—which was pleading with him to stop giving the church such a bad name, and soon threatening him if he didn't stop—and resorted to increasingly violent terrorist tactics to enforce Savonarola's fundamentalist interpretation of holy scripture and apply its strict rules to the daily lives of Florentines.

By the end, Savonarola was sending shock troops of children known as the "White Shirts" marauding across the city, the gangs forcing their way into people's homes at will and hauling off anything considered unholy or corrupting—fancy clothes, jewels, and makeup, fine furnishings and other extravagances, musical instruments, works of ancient (i.e. pagan) writers and poets, any art that was not of a strictly religious nature, and any other display of distinctly un-pious ostentation and wealth—in short, "vanities."

They carted the lot of it to the center of town, heaped it all into a huge pile on Piazza della Signoria, and consigned it all to the flames. They called this the "bonfire of the vanities."

Even the great artist Botticelli—who, up until then, was most famous for his allegorical scenes out of pagan myth—got caught up in the religious fervor and is said to have tossed several of his paintings onto the fire to fuel the flames.

(The artist also abandoned the pagan themes of his youth—which gave us the über-famous Birth of Venus and Allegory of Spring now in the Uffizi Galleries—and spent the rest of his career churning out vapid Madonna and Child altarpieces and other works on strictly religious themes.)

By May of 1497, Pope Alexander VI had had enough of the "Mad Monk" and and his increasingly revolutionary preaching and excommunicated the rogue friar.

That not having quite done the trick, in 1498 the pope then threatened to ex-communicate the entire city of Florence en masse for continuing to protect the preacher, and demanded Savonarola's immediate arrest and execution.

The ever-pragmatic Florentines finally came to their collective senses. They promptly turned on their erstwhile zealot, stormed San Marco on April 8, and after a bloody battle, Savonarola surrendered.

He was arrested and summarily charged with a laundry list of crimes, including heresy, sedition, and false prophesy.

Florentines are also very practical, so when they spent a few weeks torturing Savonarola around to their point of view vis a vis his crimes, they were careful not to harm his right arm. That way, he could still sign the confession when they were done.

On May 23, 1498, the Florentines decided they'd had enough of the rabid-dog monk, dragged him and two followers to the torture chamber, pronounced them heretics, and led them into the piazza for one last day of fire and brimstone.

With the confession signed, all the legal loose ends were tied up. On May 23, 1498, the Florentines dragged Savonarola to the very same spot on the Piazza della Signoria where he had put the torch to the city's vanities, and sent him to his eternal reward atop a bonfire of their own.

The ashes were tossed into the Arno.

Florence returned to (secular) republican rule for a while—until the Medici came back into town in 1513 to take charge once again.

For over seven centuries, Palazzo Vecchio has been the symbol of the civic power of Florence. Towering over Piazza della Signoria, where it was built in 1299, the palace hosted the Medici (as their private home) and the headquarters for the Republic. In this Palazzo Vecchio Tour, led by a trained historian, we will dive into the famed palace and its layered history. Using art and architecture as our text, we'll look deeply into the intrigues, dramas, and machinations that fueled the Florentine Renaissance. Palazzo Vecchio Tour During our three hours together we’ll look closely at the rise of the Medici family and their influence on the city. In our exploration we’ll encounter such Renaissance thinkers as Leonardo da Vinci, Michelangelo, Machiavelli, and the great Medici power brokers and patrons that helped make their work possible. We’ll watch the old republican democracy of Florence fade into the quasi-monarchical court of the Medici, and meet a wide array of significant figures from history, including the radical cleric Savonarola whose apocalyptic preaching and eventual “bonfire of the vanities” shook Florence in the last decade of the 15th century. Along the way we’ll gain valuable insight into the politics, biographies, and intrigues that helped shape the Italian Renaissance. On the Walk Our visit begins in front of the palace, in Piazza della Signoria, with a brief introduction on the political forces at work during the era of the Florentine Republic. Stepping into Palazzo Vecchio we’ll spend time in the Hall of the 500, a sort of battleground between the Medici and Republican ideals: an enormous chamber packed full of history and fascinating details. Here we’ll encounter and familiarize ourselves with the life-long achievements of Cosimo I, Grand Duke of Tuscany. Using the vivid artwork left by Giorgio Vasari and his school, we will retrace the conquests of the Medici grand duchy, discussing the rivalry between Florence, Siena, and Pisa, and how power was consolidated by the Medici family. We will also spend some time discussing a significant and controversial discovery in the Hall of the 500 of a long lost da Vinci fresco and the forty-year research project behind it. From Art to Feminism The rest of our visit will include time in Cosimo’s private rooms that highlight the glories of the Medici rulers beginning with Cosimo the Elder, the Pater Patriae, banker and artistic patron who gave rise to the family legacy in the early 15th century. Through Vasari’s stunning Hall of the Elements we will reach the apartments of the powerful and influential Eleonora da Toledo, Grand Duchess, where we will have the opportunity to understand the role of female power in the context of Florentine politics. We will proceed to observe the Florentine Mannerist frescos in the Hall of Justice and after lingering on Donatello's original bronze statue of ''Judith and Holofernes'' in the Hall of the Lilies we will stop at Machiavelli's office and the impressive Hall of Geographical Maps, a massive wardrobe for the Medici possessions. Our discussion will range across topics, from art to politics to sexuality; but our narrative will continue to center on the struggle for power and the use of that power once attained. Take Aways At the end of our time together we’ll come away with a much more detailed picture of Early Modern Florence, when the city rose to become one of the most important centers of art and learning in the world. We’ll emerge with a better understanding of the Medici family and their pivotal influence on history. 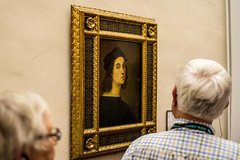 Uffizi Gallery and Palazzo Vecchio Skip-the-Line Combo Tour
3h | from €79
Book it
Even hard-core art lovers are overwhelmed by the wealth of masterpieces inside Florences Uffizi. If you are dying to take a look inside but arent quite sure where to start, this Uffizi tour is perfect for you. Your expert, English-speaking guides will lead you on an epic journey through this collection that will double as a master class in art appreciation. Along the way youll stop off at works from all the masters youve heard of (Raphael, DaVinci, Botticelli, Titian, Caravaggio) and also meet a few that arent as famous (Cimabue, Duccio, Giotto). You'll also learn about the history of Palazzo Vecchio, once the heart of art and government in Florence.

Art is intimidating, and few art museums are more impressive than Italys greatest vault of masterpieces: Florences Uffizi. But it doesnt have to be this way, our Uffizi tour is tailor-made to allow you to explore and discover the jaw-dropping, history-changing world of Renaissance art: Whether you are a seasoned art-lover or a rank amateur.
The tour, like the museum, is chronological, so after skipping the (always long) entrance lines your expert, English-speaking guide will introduce you to early Renaissance masterworks from Cimabue, Duccio, and Giotto. Through their paintings youll learn to distinguish the styles and techniques that created a revolution in the visual arts.

Your next stop is Palazzo Vechio. For centuries this was the heart of art and government in Florence; so important that both Michelangelo and DaVinci were hired to paint murals on its walls. Your tour includes the incredibly impressive Council of 500 and an intro to the tumultuous history of Florence. You'll hear how and why the Medici family abandoned this majestic fortress, building the Vasari Corridor all the way through the Uffizi Gallery to their new home at Palazzo Pitti.

The Piazza della Signoria has been the center of political life in Florence since the 14th century with the prominent Palazzo Vecchio overlooking the square. It was the scene of great triumphs, such as the return of the Medici in 1530 as well as the Bonfire of the Vanities instigated by Savonarola, who was then himself burned at the stake here in 1498 after he was denounced by the Inquisition as a heretic. A marble circle inscription on the piazza shows the location where he was burned.

Details
Bonfire of the Vanities
Free

"Traveling – it leaves you speechless, then turns you into a storyteller.”
— Ibn Battuta