In Cinque Terre
In general

more
Get active
In Cinque Terre
In general

Sailing the coast and islands of Italy

The best active pursuits and outdoor activities in Italy

more
Get active
Get Active tours 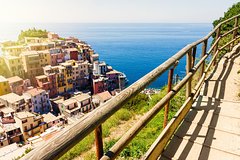 E-bike tours from La Spezia
4h | from €100
Book it
Choose between 4 different tour options, decide if see the famous Cinque Terre or discover less well known parts of this beautiful territory: Portovenere or Lerici & Tellaro (Gulf of Poets tours) or deepen the medieval history of this area, chosen by the Romans for the foundation of the colony of Luni. Each tour lasts 4 hours and depart from La Spezia.

The ebike guide will welcome you near La Spezia train station at 8,45 am. You will be given the e-mountain bikes and a short briefing with some instructions about the tour you have chosen.
There are 4 tours options:
--Classic tour: La Spezia- Cinque terre: After about 30 minutes cycling on the road leading to Portovenere which offers you great views of the gulf, you will start a climb on an abandoned military road that takes you up to the little village of Campiglia which will take approximately 2 hours biking up the hill to 1,312 feet (400 meters) above sea level. From there, you can enjoy breathtaking views over the Gulf of Poets on one side and the sea of the Cinque Terre on the other side. You will reach Riomaggiore, Manarola, Volastra cyclying on paved roads and off road trails. If the tour timing and conditions will be respected, it will be possible to reach Vernazza.
The two tours of the Gulf of Poets:
A coast of many colors, beautiful and unique villages overlooking the sea, green hills and clear water. The Gulf of La Spezia  was greatly beloved by poets and writers such as Shelley, Byron, Petrarca and Montale. From them it took its name, the Gulf of Poets, which goes from Lerici to Portovenere embracing between two headlands beaches, rugged coastline, blue sea, ancient villages and wild nature. Tellaro, San Terenzo, Fezzano, Le Grazie, the island Palmaria, Tino and Tinetto.
--La Spezia- Portovenere: You'll take the road to Portovenere with your guide and cycle passing through the villages of the western side of the Gulf of Poets: Acquasanta - Marola- Cadimare - Fezzano - Le Grazie - Portovenere. This tour mainly take place on paved roads.
-- La Spezia- Montemarcello: this is the second part of Gulf of poets tour, the eastern part. You'll cycle on paved roads and off road trails and pass through Fossamastra, Muggiano, San Terenzo, Lerici with its big castle, the small and so beautiful Tellaro, very similar to a Cinque Terre village but less well-known, up to Montemarcello.
--Tour of Val di Magra: from La Spezia you'll ride on the road leading to Lerici, then you'll start your route in the inland of the Gulf. You'll visit
Sarzana (the boundary between Etruria and Liguria in Roman times)- Fosdinovo - Castelnuovo - Ameglia Fiumaretta - amphitheater and ruins of Luni, ancient Roman colony.
The valley of a hundred castles, villages perched on the hills of ancient churches and unwinds according to a single thread that brings it up to Ameglia from Pontremoli, following the route of the Via Francigena and its variants, despite the irruption of different gentlemen by the Malaspina, Fieschi, the Republic of Genoa, the Medici.
Each Tour offers breathtaking views and unforgettable sceneries
Each tour lasts 4 hours and ends at the departure point.

E-biking Cinque Terre
4–5h | from €69
Book it
Enjoy the Cinque Terre area in a different and innovative way, on a cycling E-bike tour! We take the train from Levanto and we start to bike in Riomaggiore, going up, where it is possible to see the Cinque Terre area from above. The e-bike will make the journey super easy for everyone!
Join this 4 hours tour, with a tour guide leading you along the way.

The tour starts by Hotel Europa, via Dante Alighieri 41, Levanto; here the travelers will be informed how to manage the bikes, and some basic safety rules.

After taking the train in Levanto with the bike, we will descend in Riomaggiore, and have a brief visit of the Church of San Giovanni Battista.

After 30 minutes of biking from Riomaggiore, we will make a brief stop in Volastra. Here we can have a small rest, drink water, and visit the Sanctuary "Nostra Signora della Salute".

After leaving Volastra, and biking for less than one hour on a street from which it is possible to see all the area of the Cinque Terre from above, we will arrive in the Sanctuary of Soviore. Here we will make a brief rest, under secular trees, eating Focaccia and tasting local Wine. We will also visit the interior of the church.

Finally, after leaving the Sanctuary of Soviore, we will arrive back in Levanto. 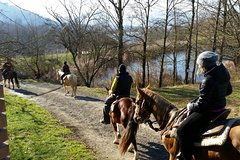 Horseback riding in Lunigiana
4h | from €105
Book it
The Lunigiana is an ancient, mystical settlement area, named after the Roman city Luni which was located in Northern Italy, between Liguria and Tuscany. The Lunigiana, a region of Tuscany dear to Dante Alighieri, which was home to the aristocratic Malaspina family who dominated the whole area. There are about 100 magnificent castles like those in Pontremoli and in Fosdinovo, along with the perfume of chestnuts and testaroli pasta at every turn. The stunning Natural Park of the Apuan Alps, is where the Italian Resistance movement was started with the first partisan formations, and can be explored in any season via the many wonderful routes.

The tour starts and ends at 9.30 am from Aulla train station. Once you've reached the riding place in the agriturismo in Lunigiana and after a short briefing with your horse riding guide, youll make your way into the Via Francigena, the ancient route that in medieval times connected Canterbury to Rome, passing through the chestnut forest and oaks and reaching the aristocratic castle of the Malaspina family, experiencing both the serenity and the culture it offers.
The horses are well-trained, fit and a pleasure to ride.
After the riding experience you will relax in the typical restaurant of the farmhouse enjoying the specialities of the region.
During the summer time dont forget your swim suit for a bath in the swimming pool of the agriturismo.
Return to Aulla's train station. 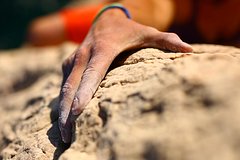 Rock climbing
4h | from €392
Book it
A unique and thrilling way to get close to our spectacular coastal landscape! This tour is suggested for people with rock climbing experience as well as for those who want to try this amazing sport for their first time. It is wholly accompanied by a professional, authorized, English speaking alpine guide to ensure the safety.

You will explore one of the several itineraries of this incredible climbing spot: vertical rocks high above the Ligurian sea between Portovenere and the Cinque Terre. Meet the mountain guide in Portovenere and hike up on the scenic mountain path to reach the climbing spot (about 45 min. hike, about 300 m above sea level). After a short briefing enjoy the rock climbing at one of the most scenic spots in the Mediterranean area. At the end of the tour return to Portovenere. The climbing equipment is included. This is a private tour. Guests of the party who do not like to climb themselves but would like to join the hike and take pictures of the others climbing are welcome.
Transfer from the station of La Spezia Centrale to Portovenere is included.
A good physical fitness is required. Equipment: wear comfortable clothing for hiking, bring one extra t-shirt, drinking water (1 l per person at least, depending on the season). Do not forget your camera! 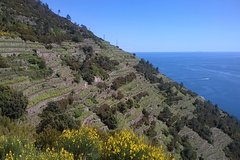 5 Terre hiking tour
4–6h | from €250
Book it
The villages of the Cinque Terre are spectacular, but the paths that unite them offer unique views of the sea and the villages, passing through the vineyards and dry stone walls characteristic of this area

One of the characteristic villages of the Cinque Terre, with its vineyards overlooking the sea

The only village without a port, 80 meters above the sea with its particular shape

Vernazza, one of the most beautiful villages, with the small beach near the church of Santa Margherita d'Antiochia built on the seashore 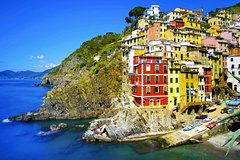 Cinque Terre Day Trip from Milan With Hotel Pickup
14h | from €141
Book it
Discover the beautiful Cinque Terre! A UNESCO World Heritage site, Cinque Terre, meaning five lands (Riomaggiore, Manarola, Corniglia, Vernazza and Monterosso) are five perilously perched villages strung along a short stretch of cliffs that face the Liguria Sea on one of Italys most scenic stretches of coastline.

Leaving Milan, you arrive directly at the Cinque Terre and via a scenic route on the coast you reach Manarola. Here you'll have free time to venture around the vineyards, stroll the piers where fishing boats line the shore or watch the locals and the tourists jumping into the sea from the rocks of the harbour!

Right before lunch time you catch the train to Monterosso al Mare, the biggest of the five villages, where you will have time to explore and visit the beaches dotted along the coast. Despite the number of tourists, there is still a real sense of local identity even in the most tourist-crammed little piazze'. Restaurants, bars and accommodation all have an endearingly homespun air about them as though when the locals saw tourists coming, they found a few garden chairs to stick on their terrace, hand painted a sign and began serving customers.

During your free time, if you wish, you will able to explore the beginning of some of the trails leading inside the Cinque Terre national park.

From Monterosso you will start the final leg of your journey, probably the most inspiring, a 90 minutes boat cruise. The perfect way to admire the stunning views of the Cinque Terre and the delightful village of Portovenere from the sea. After this memorable experience, you will arrive at La Spezia where your coach will be waiting to take you back to Milan. 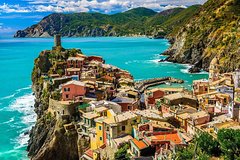 THE PEARLS IN THE GULF OF POETS: CINQUE TERRE PRIVATE TOUR
10h | from €87
Book it
An authentic earthly paradise just around the corner. A place suspended in time, 5 villages hanging between sea and land, one of the most amazing and enchanting landscapes in the world, celebrated by such Romantic poets as Lord Byron and Shelley!

The first village of the coastline, dating back to the early thirteenth century, is famous for its historic character and local wine. You can admire the houses leaning one against the other and stroll along the narrow cobble alleyways and sheltered paths.

A seaside town surrounding a small natural port. As well as comfortable clothes and shoes, we recommend you bring your swimwear!

An ancient fishing village considered The Pearl of the Cinque Terre, where you will be awed by its enchanting beaches and the lush vegetation encircling the little town.

Because in the end

“Because in the end, you won’t remember the time you spent working in the office or mowing your lawn. Climb that goddamn mountain.”
― Jack Kerouac